What does it mean to rise from the dead?

In today's readings there are two mountains: Mount Moriah and Mount Tabor. Two fathers summon their sons, one to one mountain and the other to another mountain.

In the first instance, the father, Abraham, is instructed to sacrifice his only son with his wife Sarah on Mt. Moriah. This son, Isaac, was improbably conceived well after Sarah had passed through menopause it seems. His name, Yitzak in Hebrew, means laughter and refers to Sarah's response when informed she would conceive and bear a son in her old age. It seems reasonable to infer that it would be through Isaac that God would fulfill his promise to make of Abraham's descendants "a great nation" (Gen 12:2). Great nation aside, it seems an abominable request that God made of Abraham in order to "test" him.

The Hebrew word translated as "test" in Genesis 22:1, which transliterates as nse, literally means "probed." I take this to mean God issued a call to Abraham to see what his response might be. The Hebrew word nse has been translated into English using a variety of words, including "tempt," as in "God did tempt Abraham" (KJV). Whether God tempted Abraham to kill his son or tested him by requesting that he do it, this passage is troubling. It remains troubling despite the fact that Abraham, in the end, is not required to actually kill his only son. Frankly, it is difficult to determine which is more disturbing, God's directing the murder of Isaac or Abraham's willingness to carry it out. The deeply disturbing nature of this story is not wholly mitigated by our recognition, as Christians, that it is a foreshadowing of the Father permitting his only Son to be sacrificed on yet another mountain: Calvary. If this story doesn't bother you, doesn't get under your skin a bit, then you're not paying attention or you don't care. It's an excruciating encounter with the Mystery whom we call "God."

As the Buddhist axiom states it - to live is to suffer, at least to some extent and some of the time. This axiom is verified by universal human experience. I can only chalk up what God demanded of Abraham and his response up to what God revealed through the prophet(s) whose oracles constitute deutero-Isaiah:

The great Christian spiritual master of the last century, Metropolitan Anthony Bloom, in his always-relevant book Beginning to Pray, noted:


To meet God means to enter the 'cave of a tiger' - it is not a pussy cat you meet - it's a tiger. The realm of God is dangerous. You must enter into it and not just seek information about it

That the story of Abraham's attempt to murder his son is a foreshadowing of the Father sacrificing his Son is borne out by our second reading, taken from St Paul's Letter to the Romans: "If God is for us, who can be against us? He who did not spare his own Son but handed him over for us all, how will he not also give us everything else along with him?" (Rom 8:31b-32). We know that, unlike Isaac, who seemed an unwitting and uninformed participant in the event that occurred on Mt. Moriah, Jesus undertook his passion and death in full awareness and voluntary obedience to the Father out of love for our sake. 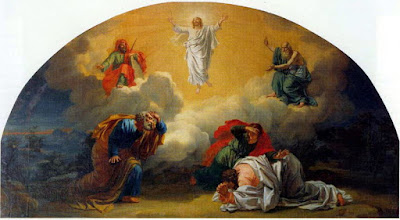 Transfiguration of Jesus, by Andrei I. Ivanov, 1807

Rather than an account of Jesus's crucifixion for our Gospel reading today, we have St Mark's account of his Transfiguration. Jesus's Transfiguration was a preview of the glory of his resurrection. It is also a sure sign that he is the fulfillment of the Law and the Prophets. This is attested to both by the appearance and subsequent disappearance of Moses and Elijah. After Moses and Elijah disappeared, Peter, James, and John heard the voice of the Father say, "This is my beloved Son. Listen to him" (Mark 9:7). Then "they no longer saw anyone but Jesus alone..." (Mark 9:8).

I like St Mark's account, which was probably the earliest written, because it shows how confusing this was for the three men who accompanied Jesus up Mt. Tabor. Mark makes clear that Peter suggested building the three booths because he had no idea what else to say (Mark 9:5-6). As they made their way down from the mountain, Jesus charged them to not say anything to anyone about what they witnessed until after he had risen from the dead (Mark 9:9). This made Peter, James, and John wonder "what rising from the dead meant" (Mark 9:10).

Each time we ascend the mountain to participate in Mass we, too, witness a Transfiguration; the transformation of the bread and wine into the body and blood of Jesus Christ. Does your participation leave you awestruck?

As noted last week, "Lent" means "springtime." Spring is the time when what appears to be dead comes back to life. The miracle of this is not negated by the fact that we know so much about how this cycle works. In fact, our wonder should be enhanced by such knowledge.

I think a good question to ponder over this next week of Lent is "What does rising from the dead mean?" You need to ask yourself this question in a serious way, which is the only appropriate response to such serious readings and not in some superficially sentimental way. Asking this in a serious way may take this form: "What needs to die in me so that I can rise to new life?"
at February 25, 2018