"Let us then go to him outside the camp"

From the outset, Mark's Gospel shows us that Jesus is the healer, the one who makes us whole. By "made whole" I mean wholly human. To be fully human is to be holy. Being holy means nothing other than to love perfectly, to love like Jesus, that is, to love without exception. "The glory of God," according to St Irenaeus, "is a human being [Greek neuter anthropos] fully alive." In its Pastoral Constitution on the Church in the Modern World, Gaudium et Spes, the Second Vatican Ecumenical Council taught:

He Who is "the image of the invisible God" (Col. 1:15), is Himself the perfect man. To the sons of Adam He restores the divine likeness which had been disfigured from the first sin onward. Since human nature as He assumed it was not annulled, by that very fact it has been raised up to a divine dignity in our respect too. For by His incarnation the Son of God has united Himself in some fashion with every man. He worked with human hands, He thought with a human mind, acted by human choice and loved with a human heart. Born of the Virgin Mary, He has truly been made one of us, like us in all things except sin (sec 22)

In today's Gospel, Jesus did something an observant Israelite was never to do: "he stretched out his hand [and] touched" a leprous person (Mark 1:41). While the man was made clean, Jesus was rendered ritually unclean.

Isn't is what Jesus did for the leprous man what he wants to do for each one of us? He desires to heal us, to make us whole, to restore our full humanity, which means restoring us to God, to ourselves, and, last but certainly not least, to each other. How he does this is described well by a passage from the fourth Servant Song found in Deutero-Isaiah. Deutero-Isaiah, which Scripture scholars tell us, was written during the Babylonian exile, a time of great affliction for Israel:

Yet it was our pain that he bore,
our sufferings he endured.
We thought of him as stricken,
struck down by God and afflicted,
But he was pierced for our sins,
crushed for our iniquity.
He bore the punishment that makes us whole,
by his wounds we were healed (Isa 53:4-5) 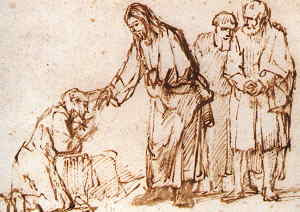 
Our passage from Leviticus makes it clear that a leper "shall dwell apart, making his abode outside the camp" (Lev 13:46). While not a direct result of being rendered unclean by his contact with the leprous man, but rather due to the man's inability, despite the express command of the Lord, to keep what Jesus had done for him to himself, the Lord was relegated to remaining "outside in deserted places" (Mark 1:45).

St Paul, in our second reading, tells the Christians of ancient Corinth to imitate him as he imitated Christ (1 Cor 11:1). How did Paul imitate Christ? He imitated Christ by not seeking to do what benefited him but by seeking the good of everyone else for Christ's sake, which is to say for the sake of the Gospel (1 Cor 10:33). In The Flowers of St Francis, a literary work consisting of vignettes from the life of St Francis of Assisi, there is a beautiful story of Francis encountering a leprous man in a deserted place. While the saint did not heal the man of his physical disease and the deformities it caused, he affirmed the man's full humanity, not by merely touching him, but by hugging him. This is depicted beautifully, that is to say wordlessly, in Roberto Rossellini's amazing cinematic version of The Flowers. You can watch it here.

Despite being relegated to "deserted places," "people kept coming to [Jesus] from everywhere" (Mark 1:45). In the final chapter of the anonymously-written Letter to the Hebrews, we read:

The bodies of the animals whose blood the high priest brings into the sanctuary as a sin offering are burned outside the camp. Therefore, Jesus also suffered outside the gate, to consecrate the people by his own blood (Heb 13:11-12)

The inspired author then exhorted his readers/hearers: "Let us then go to him outside the camp, bearing the reproach that he bore" (Heb 13:13). We bear the reproach he bore by bearing the reproach of others, especially those who our many of our fellow Church-goers are quick to dismiss and to exclude. I think perhaps the main lesson from today's readings is that nobody is excluded from God's reign. Notice that Jesus did not inquire about the man's worthiness. He simply heeded his plea. Those who run the greatest risk of being excluded from sharing in God's reign are those who are bent on excluding others now.
at February 11, 2018