Since the first of the year I have been immersed in writing what I am sure is an extremely mediocre paper on Samuel Beckett. But I don't let the mediocrity, or downright horrible nature, of my work interfere with taking a journey. Writing this paper has been a great journey. The works of Samuel Beckett have fascinated me for the better part of the past 15 years. I really came to Beckett through his dramatic works, his plays, especially his later plays. In fact, for my paper, entitled "Samuel Beckett: Good Friday's Child," I undertake an analysis of sorts of his play That Time but also draw from the work for which he will best be remembered, Waiting for Godot, as well as Not I.

Why am I writing a paper, let alone a paper on Beckett? I am pursuing a doctorate of ministry through Mount Angel Seminary in Oregon. The paper is my term paper for an amazing class (I have only had amazing classes in the program), The Catholic Imagination. It is a paper on the theological/pastoral phenomenon of hopelessness, despair, and the anxiety that arises from experiencing these things, something very common in advanced societies of late modernity. One aspect of Beckett I was able to mention only in passing was the profound effect music, especially music from the classical (the actual era, not just the general grouping of all musical compositions that are not folk, rock, punk, country, New Wave, rap, rhythm, etc.) and romantic periods. 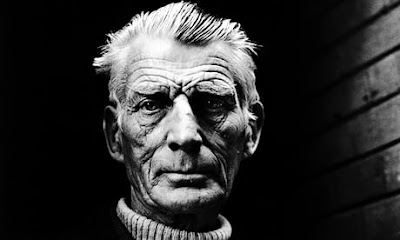 Here is my passing mention of this:


The play features three voices: A, B, C. In his stage directions, Beckett specified “Voices A B C are his [the Listener’s] own coming to him from both sides and above.” He further stipulated that the voices “modulate back and forth without any break in general flow except where silence is indicated.” The voices are those of the Listener at different times of his life. A is the voice of middle age attempting to recall youth. B is the voice of childhood seemingly verging on adolescence. C seems to be the voice of old age. The play runs continuously, except for two 10 second pauses during the play, a seven-second pause at the start of the play and a 15-second pause bringing That Time to its end.

From the beginning of That Time to the first 10-second silence, the voices alternate in the pattern ACB ACB ACB CAB. Between the first and the second silence, the pattern is CBA CBA CBA BCA. Between the second silence and the play’s conclusion that pattern is BAC BAC BAC BAC. On my reading, this final pattern is chronological: youth, middle age, old age. In each of the play’s three sections, every voice speaks four times, which means each voice speaks 12 times total. In this way, That Time takes the form of musical composition. According to a number of commentators, Beckett wrote the lines for each voice separately, each in its entirety, prior to integrating them

Beckett was also deeply influenced by painting (see "Coming to terms with density of what we see").

Today, I ran across this piece by Sean Doran, which ran in The Guardian several years ago: "Why music struck a chord with Beckett." Doran begins his piece with a three word quote by Beckett: "Music always wins." Apart from noting that Beckett had a great fondness for several modern composers, namely Debussey, Ravel, and Poulenc, he was most drawn to and influenced by Haydn, Beethoven and Schubert, whom Doran described as Beckett's "holy trinity." I like Beckett all the more based on his distaste for Wagner, whose music has never done anything for me. I would disagree about Mahler, however. I love his Resurrection Symphony (Symphony No. 2).

Our traditio for this First Friday of Lent, an Ember Day during an Ember Week, is the second movement of Beethoven's Sonata Pathétique (Number 8 in C mminor, Opus 13). The pianist is Daniel Barenboim playing the piece live in Berlin in 2006.

As odd, perhaps even as offensive, as it might sound, Samuel Beckett is a member of my Community of the Heart.
at February 23, 2018