Today we observe the Feast of St. Stephen Protomartyr

It wouldn't be Christmastime here on Καθολικός διάκονος without a post on 26 December, the Feast of St. Stephen, patron of this blog. Stephen, by way of reminder, was one of the seven Greek-speaking men, filled with the Holy Spirit, who was chosen by the primitive Christian community and set apart by the Apostles for service to the community (see Acts 6:1-7).

The specific reason the primitive Church selected and set apart the seven was to heal a breach between the (presumably) Aramaic-speaking widows (i.e., "the Hebrews") and Greek-speaking widows. The Greek-speaking widows believed themselves to have been receiving the short-end of the stick in the daily distribution of food in the midst of a community that held all things in common. The seven were chosen so that the Apostles, rather than attend to this dispute, could devote their time to prayer and evangelization, both activities being described in the original Greek as diakonia. It bears noting that, while the service they were called to engage in is referred to as diakonia, nowhere in the passage are the seven referred to as diakonos (i.e., deacons). Dealing with multi-cultural and polyglot stresses, given the Gospel's universal scope, have been present in the Church from the beginning; plus ça change, plus c'est la même chose .

But in short order, the Acts of the Apostles relate how two of the seven men whom the Church recognizes as the first deacons, though the name "deacon," in Greek diakonos, is never applied to them directly- though what they were initially set apart to do (serve the widows at table) is described as diakonein- also begin to preach and evangelize. The two whose subsequent exploits were written down and handed-on were Stephen and Philip. Before the end of the sixth chapter of Acts, Stephen is already stirring people up with his proclamation of salvation in Christ Jesus (see Acts 6:8-15) It is in the seventh chapter of Acts that Stephen's evangelizing is described. The entire seventh chapter, which consists of 60 verses, is taken up with Stephen's preaching, the response, ending with his martyrdom.

When it comes to the Acts of the Apostles, I am of the Martin Hengel school, which holds that the book is rather more than less accurate account of the primitive Church (see Acts and the History of Earliest Christianity). Hence, I believe that we find in Stephen's preaching, which is set forth in Acts 7:1-53, consists of a fairly comprehensive laying out of the Gospel kerygma (kerygma refers to the primitive Church's preaching, its laying out of the essential Gospel message). Stephen was Greek-speaking Jew. His preaching is a surprisingly detailed account of what we now call salvation history, which culminated with Jesus's birth.

Stephen ended his preaching discourse by saying to those within his hearing:

You stiff-necked people, uncircumcised in heart and ears, you always oppose the holy Spirit; you are just like your ancestors. Which of the prophets did your ancestors not persecute? They put to death those who foretold the coming of the righteous one, whose betrayers and murderers you have now become. You received the law as transmitted by angels, but you did not observe it (Acts 7:51-53) 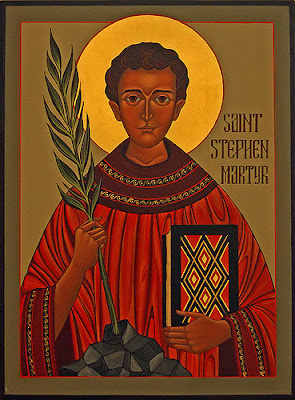 "When they heard this," the inspired author related, "they were infuriated, and they ground their teeth at him" (Acts 7:54). Grinding their teeth at him seems to indicate they were moving toward him, intent on violence. As they ground their teeth, Stephen cried out that he saw "the heavens opened and the Son of Man standing at the right hand of God" (Acts 7:56). Because, to his Jewish hearers, what he was saying seemed blasphemous, "they cried out in a loud voice, covered their ears, and rushed upon him together" (Acts 7:57). They grabbed him, drug him outside the city, and at the instigation of one Saul of Tarsus, who makes his first appearance in the New Testament in Acts 7:58, they stoned Stephen to death. As they threw rocks at him, in imitatio Christi, the man chosen because he was filled with the Spirit, implored: "Lord, do not hold this sin against them" (Acts 7:60). Then he died.

More than 10 years ago, on 10 January 2007, Pope Benedict XVI delivered a Wednesday catechesis on St. Stephen, the Church's Protomartyr. In this message, our then-Holy Father said:

Stephen's story tells us many things: for example, that charitable social commitment must never be separated from the courageous proclamation of the faith. He was one of the seven made responsible above all for charity. But it was impossible to separate charity and faith. Thus, with charity, he proclaimed the crucified Christ, to the point of accepting even martyrdom. This is the first lesson we can learn from the figure of St Stephen: charity and the proclamation of faith always go hand in hand.

Above all, St Stephen speaks to us of Christ, of the Crucified and Risen Christ as the centre of history and our life. We can understand that the Cross remains forever the centre of the Church's life and also of our life. In the history of the Church, there will always be passion and persecution. And it is persecution itself which, according to Tertullian's famous words, becomes "the seed of Christians", the source of mission for Christians to come

Historically, 26 December, the day on which Good King Wenceslas looked out, is a day to celebrate deacons and their service, their diakonia.

As a deacon, whose middle name from birth (my Dad's given name), is Stephen, and the patron of whose blog "Catholic Deacon" is St. Stephen, I say today and everyday- Sancte Stephane, ora pro nobis.
at December 26, 2017

Email ThisBlogThis!Share to TwitterShare to FacebookShare to Pinterest
Labels: Community of the Heart, Liturgical Year, Saints