The Shroud of Turin: Short Take

It is Advent. I am committed to resuming blogging on a regular basis. I hope to post something 2-4 per week, including a Friday traditio and a reflection on the Sunday readings. In an effort to follow through on this commitment, I am posting something I provided when requested to give a short-take on the Catholic Church and the Shroud of Turin. I didn't have a lot of time to go digging and so I went with what I knew off the top of my head and researched the statements of modern popes on the shroud, which demonstrated a more nuanced view of the shroud, beginning with Pope Benedict.

The origin of the Shroud of Turin is unknown. The cloth’s whereabouts prior to 1357 are unknown. But from 1357 onwards, the location of the shroud is well-attested. The shroud has been in Turin since 1578. Initially, it belonged to the Royal Savoy family. It was only in 1983 that the family gave the shroud to the Catholic Church.

Far from avoiding or evading attempts to scientifically examine this unique artifact, since being gifted the Shroud of Turin by the Savoy family, the Catholic Church has sought to gain as much scientifically-derived information about the shroud as possible. In these undertakings, great effort has been made to maintain the shroud’s integrity. 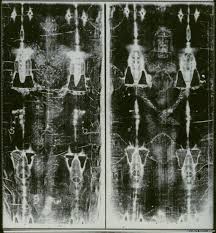 In 1898 the first negative image was taken of the Shroud of Turin. This is the image from which most people would recognize it because the image it bears of the beaten and crucified man is more pronounced than just looking at the shroud itself. The shroud has been subjected to 2 carbon dating tests. The first test, conducted in 1988, indicated the shroud dated from approximately 1,000 years after the time of Jesus. The range given for the shroud’s age based on this initial test was sometime between 1260-1390. It bears noting that the shroud’s appearance in historical documents beginning 1357 falls within the range of time during which those who conducted the first test concluded it originated.

A second test, performed in 2008, suggested the initial test might be 1,000 years off. It is safe to say these efforts to date the shroud are inclusive. As a result, opinions as to whether it is the burial garment of Jesus or an ingeniously made relic from the Middle Ages remain divided. It is not a matter of faith for Catholics to believe the Shroud of Turin is the burial garment of Jesus. It is not something the Church holds de fide.

The Holy See has never officially proclaimed (or denied) the authenticity of the Shroud of Turin. Popes since Julius II in 1506 have encouraged devotion to Christ and belief in his resurrection the shroud facilitates among the faithful. Some popes, including John Paul II, have referred to the shroud as a relic. Commenting on the shroud in 1980, John Paul II called it “a distinguished relic linked to the mystery of our redemption.” Pope Pius XII referred to it as “the holy thing perhaps like nothing else.” For an object to be a genuine relic, however, its origin must be sure.

More recently both Popes Benedict XVI and Francis have referred to the Shroud of Turn as an “icon” rather than a relic. Addressing the public display of the Shroud of Turin during the first year of his pontificate, Pope Francis called it an “icon of a man scourged and crucified.” For a similar showing of the shroud in 2010, Pope Benedict XVI referred to it as an “icon written with the blood of a whipped man, crowned with thorns, crucified and pierced on his right side.”
at December 07, 2017

Email ThisBlogThis!Share to TwitterShare to FacebookShare to Pinterest
Labels: Notes and asides, Reflections and Ruminations