Evangelizing culture in the digital age

This week's Friday traditio, the last of this seminal feature of Καθολικός διάκονος that has been infrequent this year, was made easy by an amazing article written Nick Ripatrazone for America magazine: "A Catholic Media Trinity: Marshall McLuhan, Walter Ong and Andy Warhol." While short, there is a lot to be ingested from this piece, which summarizes the approach of three prophets of our digital age, all whom "watched the electronic age arrive and did not blink."

Evangelization is a word Catholics use these daze ad nausaum. "Evangelization" is often used synonymously with "apologetics." But apologetics, which has its place in evangelization, albeit a very confined and small place, is very often the case of offering a discourse in the face of life's inescapable questions, those questions about purpose and meaning that make us human. By "offering a discourse" I mean answering questions nobody is asking in a boring, didactic manner.

Marshall McLuhan, a devout Catholic convert, whose work is as fresh today, perhaps even fresher, than when he wrote it, grasped what it means to evangelize in the digital age (something I hope I do in these poor web pages that constitute my blog): "We must confront the secular in its most confident manifestations, and, with its own terms and postulates, to shock it into awareness of its confusion, its illiteracy, and the terrifying drift of its logic. There is no need to mention Christianity. It is enough that it be known that the operator is a Christian."

It's no good trying to roll back the tidal wave of history. Nonetheless, some try. All such efforts are bound to fail. History, as the Church historian Angelo Roncalli, speaking as Pope John XXIII at the opening of the Second Vatican Ecumenical Council, is "the great teacher of life." The lowest ebbs of ecclesial history are when the Church misconceived the Gospel of Jesus Christ as a rearguard action. Such a misconception fails to recognize, let alone realize, that Christ is the Lord of history and that both presently and in the end, all history is salvation history. There is no human milieu in which God, through Christ and by the power of the Holy Spirit is not active and present. 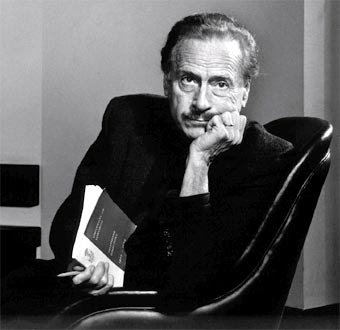 
According to Riptrazone, Andy Warhol is a great example of evangelization as set forth by McLuhan:


High and low, sacred and mundane, immediate and eternal: Paradox is endemic to Catholic storytelling and art. Warhol was one of its finest visual prophets. At Warhol’s memorial service, the art historian John Richardson pulled back the veil: Warhol was a devout Catholic, and his faith was "the key to the artist’s psyche." He went to daily Mass at the Church of St. Vincent Ferrer in New York and served meals to the homeless. "Never take Andy at face value," Richardson explained. "The callous observer was in fact a recording angel" Ripatrazone

Our Friday traditio for this last Friday of 2017 is a song by Lou Reed and John Cale of the Velvet Underground, a band that owed a lot to Warhol. The song, entitled "Work," is off a memorial album for Warhol Reed and Cale cut called Songs for Drella:

Andy was a Catholic,
the ethic ran through his bones
He lived alone with his mother, collecting gossip and toys
Every Sunday when he went to church
He’d kneel in his pew and say, ‘It’s just work, all that matters is work'

Email ThisBlogThis!Share to TwitterShare to FacebookShare to Pinterest
Labels: Community of the Heart, Cultural, Musical revelry, Reflections and Ruminations