This morning an online friend, who is a priest in the Church of England, brought to my attention an article in Relevant magazine about British comedian Russell Brand: "The Second Coming of Russell Brand: Fifteen years after embracing sobriety, he’s now talking about how culture can stop its destructive patterns: by following Jesus." At the beginning of the piece Brand is quoted as saying, "My personal feeling is the teachings of Christ are more relevant now than they’ve ever been." The article is a rather lengthy interview with Brand about his nascent Christianity, if I may state it that boldly. which is probably too boldly.

I will be honest, until a few years ago I really couldn't stand Russell Brand. But it's clear that he has become a more mature human being. As a 52-year-old emotionally going on something like 22 myself, it's nice to see someone else growing up, learning and changing. He makes ample use of Chesterton's observation that every man who knocks on the door of a brothel is looking for God. This expresses the human condition in a rather pithy manner, even if from a male perspective.

Even though I have come think better of Brand prior to reading the Relevant piece, reading it surprised me. I have friends who are successfully recovering from addiction and who did not find the 12 Step AA model helpful. That is fine. The 12 Steps are so widely used and often people go against their will, which most of the time is a waste of time, that its lack of success in terms of the percentage of people who achieve long-term sobriety doesn't appear promising. Like any other behavioral therapy program, there is no magic in the 12 Steps apart from doing them with the help of a supportive group of people. But like all people who struggle with addiction, friends who did not find AA helpful have no problem with the program insofar that it does help people achieve and maintain sobriety. 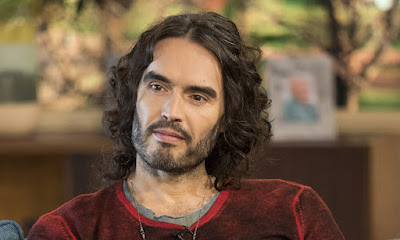 
Heaven knows that in this age of our rapidly growing knowledge of the human brain AA often looks very outdated. AA looks even worse when it becomes completely disconnected from its spiritual roots, which are Christian. Pastorally, my work with people in recovery has been with people who are achieving sobriety for the third or fourth time and, as a result of finding themselves back where they started, have grasped that the spiritual component of recovery, which is but one dimension and not the whole thing, is something to which they need to attend. It is for this purpose that I will keep and use Brand's Relevant article.

Brand, in an unassuming way, really provides a wonderful lesson in what it means to pray: "I say the Lord’s Prayer every day. I try to connect to what those words mean. I connect to what the Father means. I connect to what wholeness means to me. I think about the relationship between forgiveness and being forgiven and the impossibility of redemption until you are willing to forgive and let go." What do the words we pray mean? This is a question we should constantly ask ourselves.

Indeed, it is in the spiritual roots of the 12 Steps that Brand finds strength (comedian Marc Maron, who is Jewish, similarly discusses the importance of prayer for his own recovery). Brand, using the Lord's Prayer, which Guardini though of as a Catechism, has kept following the road, moving beyond his dependence on drugs, sex, and alcohol to dependence on God:

I’ve seen in many formats now—because I’ve played out the same pattern many times—the attachment to physical things, physical behaviors or people, will never make me happy,” he explains. “But service of others and values that are certainly found in Christianity will make me feel peace or make me feel happy. It’s a lesson that’s very hard to learn

As Keith, who brought this to my attention, noted: by being as transparently honest as he is this piece Brand has likely set himself up for some public ridicule in highly secular England. All I can say is, "Good for him."
at December 29, 2017