Feast of the Holy Innocents

On today's feast, I can't help but call to mind Pope Francis's Christmas Urbi et orbi - a message the Pope delivers at Noon every Easter and Christmas. This year the Holy Father sought to bring to our attention the slaughter of innocents, that is, of children, that sadly occurs on a daily basis. So-called advanced countries, like ours, are not blameless in this regard. We live in a time that is thoroughly bellicose. An age in which diplomacy and concern for those who bear the brunt of war is too often set aside.

Pope Francis said, "Christmas invites us to focus on the sign of the Child and to recognize him in the faces of little children, especially those for whom, like Jesus, 'there is no place in the inn'" (Lk 2:7).

"We see Jesus in the children of the Middle East who continue to suffer because of growing tensions between Israelis and Palestinians."

"We see Jesus in the faces of Syrian children still marked by the war that, in these years, has caused such bloodshed in that country." 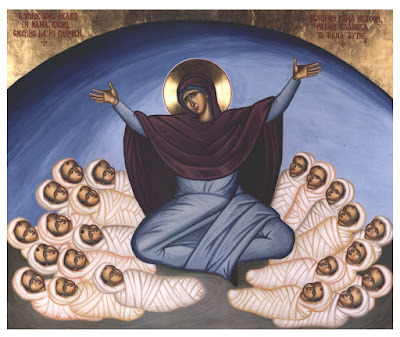 
"We see Jesus in the children of Africa, especially those who are suffering in South Sudan, Somalia, Burundi, Democratic Republic of Congo, Central African Republic and Nigeria."

"We see Jesus in the children worldwide wherever peace and security are threatened by the danger of tensions and new conflicts."

"We see Jesus in the children of unemployed parents who struggle to offer their children a secure and peaceful future. And in those whose childhood has been robbed and who, from a very young age, have been forced to work or to be enrolled as soldiers by unscrupulous mercenaries."

"We see Jesus in the many children forced to leave their countries to travel alone in inhuman conditions and who become an easy target for human traffickers. Through their eyes we see the drama of all those forced to emigrate and risk their lives to face exhausting journeys that end at times in tragedy."

"I see Jesus again in the children I met during my recent visit to Myanmar and Bangladesh, and it is my hope that the international community will not cease to work to ensure that the dignity of the minority groups present in the region is adequately protected."

St. Quodvultdeus, a fifth-century Carthaginian bishop, in a sermon, part of which is used as the second reading for the Church's Office of Readings for this feast noted:

The children die for Christ, though they do not know it. The parents mourn for the death of martyrs. The child makes of those as yet unable to speak fit witnesses to himself. See the kind of kingdom that is his, coming as he did in order to be this kind of king. See how the deliverer is already working deliverance, the savior already working salvation

In his encyclical letter Populorum progresso, which, along with Humane vitae and Evangelii nuntiandi form the critical triptych of his papal magisterium, Bl. Pope Paul VI, in a section entitled "Final Appeal" pleaded: "We must travel this road together, united in minds and hearts. Hence We feel it necessary to remind everyone of the seriousness of this issue in all its dimensions, and to impress upon them the need for action. The moment for action has reached a critical juncture. Can countless innocent children be saved? Can countless destitute families obtain more human living conditions? Can world peace and human civilization be preserved intact? Every individual and every nation must face up to this issue, for it is their problem" (sec. 80).
at December 28, 2017