Some thoughts on the theology of marriage

In my disorderly and quite undisciplined intellectual life, if that's what you can call it (I am possessed of an intellect, even if not a terribly good one), this week I began reading a May 2013 report produced by a theological commission appointed by the Church of Scotland's General Assembly: "Theological Commission on Same-Sex Relationships and the Ministry" (the report can be accessed here). In all honesty, given everything else I have going on (about which I try not to be too bitter), I haven't made it very far through the report. The report explores the question as to whether a member of the Church of Scotland can be a minister of the Word and Sacrament or a deacon if s/he (the Church of Scotland has permitted women in ministry since the late 1960s) has entered into either a legally recognized same-sex civil partnership or a legally recognized same-sex marriage.

There are clearly both continuities and discontinuities between Old and New Testament perspectives on marriage. There is clear continuity when the gospels explicitly interpret Genesis 2:24 [which I frequently refer as the Bible's UR verse on marriage] as an indication of the Creator's intent that marriage be monogamous and for life; and although the New Testament primarily addresses Christian disciples, it understands the call to marital faithfulness to be universal, and adultery to be a mark of general rebellion against the Creator

In seeking to expound on the discontinuity, Believing in Marriage went on to note:

... the Old Testament uniformly sees marriage and procreation as signs of God’s blessing and human virtue, both in the order of Creation and amongst the covenant people, the New Testament moves in a different direction. First, there is a departure from the assumption that marriage is for all – living in the light of Christ may have different implications for disciples. Second, there is almost silence on the issue of procreation – no longer is this a significant means of God fulfilling his promises to his people. Disciples are called into relationship with God in Christ, and with each other, and that relationship stands apart from, and perhaps even in tension with, the ‘normal’ social order of family life. This differing attitude can in part be explained by how the people of God are to be constituted in the light of the gospel. No longer is belonging seen as genealogical. It is not birth but belief that defines who belongs. It is primarily mission and not procreation that ensures the growth of God’s people, although this is not to deny that the divine covenant has always included the children of believers. Further, whereas the Mosaic Law assumes an intention to regulate the social order of Israel as a whole, the New Testament assumes that God’s people will exist as a minority differentiated from the wider social order, a differentiation existing even within the same family structure

I think the discontinuity highlighted here by the Church of Scotland's Working Group on Human Sexuality has relevance for Catholic discussions concerning marriage and family and not merely when it comes to ecumenism.

Continuing its analysis of the discontinuities concerning marriage between the Old and New Testaments, the section continues:

The theological motifs governing marriage also change. The New Testament views both Creation, and God’s covenant relationship to his people, in the light of Christ. As the Old Testament compares marriage to God’s covenant with Israel, the New Testament compares marriage to Christ’s relationship with his Church. Furthermore, the theme of an expected marriage between Yahweh and his people is drawn into the New Testament and presented as part of the self-understanding of Jesus. The kingdom of God is compared to a marriage-feast thrown in honour of the coming bridegroom (Matthew 9:14-15, 22:1-2; 25:1, Mark 2:18-20, Luke 5:33-35). Jesus himself is portrayed explicitly as this expected bridegroom, whose return is delayed 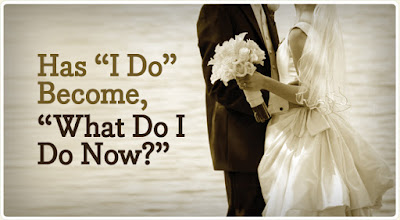 Before anyone starts to go crazy about "that heretical deacon," let me clearly note that the view of marriage set forth in Believing in Marriage is discontinuous with the Catholic Church's understanding of marriage. This becomes clear in light of the fact that, as Believing in Marriage points out, Reformed and Catholic views of marriage diverge most dramatically when it comes to the question as to whether or not marriage is a sacrament. Believing in Marriage points out that the Church of Scotland, being a Reformed Church, or, to stick with clunky Catholic terminology, "ecclesial community," does not view marriage as a sacrament. In his Institutes of the Christian Religion (4.19.34), citing Genesis 2:21-24 and Matthew 19:4-12, Calvin argued against marriage as a sacrament. Briefly, Calvin asserted that nowhere in his life and ministry did Christ institute marriage as a sacrament and he also noted that Scripture does not contain anything like a marriage ceremony. Of course, there is plenty to be discussed with regard to both of these assertions.

While some Catholics may protest, it helps to understand that marriage vis-à-vis the Church has a very complex, if not downright convoluted history. The history of what is and what is not a sacrament is an interesting history in and of itself and certainly not as straightforward as Catholics often believe. If marriage is not a sacrament, there is a credible argument to be made, one made by the Church of Scotland's Working Group on Human Sexuality, that marriage is not fundamental to the faith. After all, it does not touch on the content of the Creeds, which for the Church of Scotland are the Apostles Creed and the Westminster Confession. If marriage is understood as not being fundamental to the faith, then different conscientious views concerning the possibility of what are called "same-sex" marriages may be held and charitably discussed.

One thing that becomes increasingly clear to me as I study the sacraments at the service of communion as a married Catholic cleric is that Roman Catholics have a very high theology of both marriage and ordination. I think there is a distinction to be made between a high sacramental theology and an impossibly high theology of these two sacraments. I think it is pertinent to point this out in light of the fallout over Amoris laetita, which controversy, about which everyone seems to have an opinion, tends to obscure the most important task of all arising from the two synods on marriage: better preparing couples to live the sacrament of matrimony. Having an impossibly high theology of matrimony (and orders) concerns me because it has very real, very vexing, practical, personal, and pastoral implications.

It is not the case that I am opposed to a sacramental understanding of what have been described by theologian Owen Cummings as the "diaconal" sacraments. It is certainly not the case that I reject the sacramentality of either. But I do think our sacramental theology is often not only ahistorical, but often downright unhistorical (high vs. impossibly high). With regard to marriage, the Catholic Church has articulated very well the continuities between the Hebrew Scriptures and our uniquely Christian Scriptures, but I think we need to pay closer attention to the discontinuities, as well as to the actual history of the Church's understanding and practice of marriage over two millennia. Even accepting an ever deepening, Spirit-led, development of the Church's understanding of the sacrament of matrimony, how we got from there to here cannot be traced with anything approaching a straight line, which is not to say there is no inherent, what one might call "dogmatic," and enduring properties of matrimony. Conversely, the Church of Scotland, in light of the articulation by their Working Group on Human Sexuality of marriage in the New Testament, and virtually all other Protestant ecclesial communities, could stand to focus some attention on the importance and practice of celibacy for the sake of the Kingdom in the Church.

When it comes to the mystery of faith as made explicit in and through the sacraments, which explicitness is at least partially derived from the lives of participants in sacramental rites, thus contributing to what makes them "real," I suppose a certain "ahistoricity" is to be expected. But fanciful and unhistorical views need to be critically engaged and charitably challenged because faith is not fantasy. Evangelization is dramatically impacted by Christians who seek to live and perpetuate some kind of saccharine alternative reality. I think the trajectory on which the Second Vatican Council, particularly Part II, Chapter I of the Pastoral Constitution on the Church in the Modern World (Gaudium et Spes), set the Church when it comes to marriage, needs to be followed. This trajectory can can be described as understanding marriage first and foremost, even exclusively, as a sacrament (a mystery) instead of as a juridical reality, or a remedy for concupiscence. Like the cursus honorum, it is useful to discern to what extent the theology of marriage in the Latin Church is rooted in Roman law. I think it is only by doing this that we can begin to grasp to what extent this is consistent with revelation. I also think we're overdue for an updating, a ressourcement, of Christian celibacy, or celibacy for the sake of God's kingdom. Of course, ideally, the two need should develop hand-in-hand.

Since today is 1 April, or April Fools Day, and I am writing on marriage, I remembered that I have an aunt and uncle who were married close to 50 years ago on 1 April.
at April 01, 2017