With Vespers this evening we bring to an end the great Octave of Easter. Of course, the Second Sunday of Easter is Divine Mercy Sunday. Our Gospel reading today, taken from the Gospel According to St John (20:19-31), is about the risen Lord appearing to his disciples, not once, but twice. In between Christ's first and second appearance St John writes about Thomas not being present the first time he appeared and his refusal to believe other disciples' testimony about seeing Jesus risen from the dead in the interim.

St John is careful to note that Thomas was present when Jesus next appeared. It is when Thomas encountered the risen Christ that he was invited to probe the wounds of love. In response, Thomas proclaimed: "My Lord and my God." It was then that Jesus proclaimed those, like you and me, who believe without seeing blessed. Faith saves. If Easter ought to have any effect on us it should be to break through the façade of our often deep-seated Pelagianism, the all-too-human idea that somehow, in the end, you'll save yourself.

Like the fearful disciples in St John's Gospel, in our day it is easy for us, as Christians, to remain inside, or, to use a contemporary phrase, to create a safe space. But just as the risen Lord appeared seemingly out of nowhere, which manner of appearing tells us that Christ, risen from the dead, is with us anywhere and everywhere, in the Eucharist he comes into our midst in an unusual way. He bids us, too, "Peace be with you." It is important to note that in St John's Gospel there are no apostles as such, only disciples. But in today's Gospel we encounter a most apostolic moment. In his first appearance to his frightened, hiding, disciples, after bidding them Shalom, the Lord tells them: "As the Father has sent me, so I send you." He sent them to proclaim mercy- the forgiveness of sins in and through Christ. 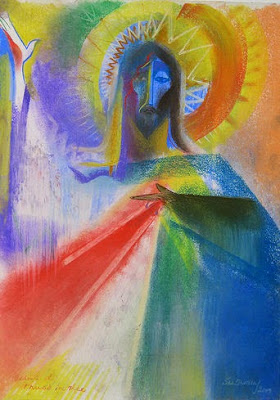 Feast Day of Divine Mercy, by Stephen B. Whatley

An apostle is one who is sent. We call St Mary Magdalene apostolorum apostola, which translated means, "apostle to the apostles." We call her this because, as the first one to see Christ after he rose from the dead, he sent her to tell the others this amazing news. Last night I attended a clergy appreciation dinner, which always dicey as a deacon because, despite being invited, the evening usually passes with nobody expressing appreciation for those of us who, while clergy, are "at the lower end of the [church's] hierarchy" and whose existence is living the tension of clerics who live largely lay lives. At the end of the day, I suppose it isn't a big deal because deacons don't serve in order to be praised. We serve to make Christ visible and even tangibly present through our service. In any case, an elderly man, who is high up in state Knights of Columbus hierarchy, gave a talk. In his remarks he tried to explain what it means for the church to be apostolic. As might be expected in a Roman Catholic milieu, his exposition of what it means for the church to be apostolic began and ended with apostolic succession.

At least to my mind, understanding apostolic succession as the sum total of what it means for the church to be apostolic is to get it half right. Moreover, such an understanding has the effect of reducing the mystery of faith to our measure by turning apostolic succession into a history lesson, one with more twists, turns, and wrinkles than than most Catholics are prepared to accept or admit. At the end of each Mass we are sent to make Christ, who we have received in communion, present wherever we are. This is where the rubber meets the road when it comes to the church being apostolic. While not all of us who, by virtue of our baptism, share in the priesthood of all believers, can forgive sins (the church reserves this authority to ministerial priests), like the frightened, holed-up, disciples, we are sent to proclaim Divine Mercy.

The name of God is mercy. As recipients of Divine Mercy, we are sent to spread God's mercy by extending mercy. We do not practice the Spiritual and Corporal Works of Mercy to earn God's mercy. We live in this way in gratitude. Living this way is what it means to worship Jesus as our Lord and our God. When it comes to sometimes feeling slighted as a deacon I need to see such moments as opportunities to bear the perceived slight patiently, which is one of the Spiritual Works of Mercy, giving thanks to God that my service is transparent. I want those I serve to see through me in order to see Christ. I want them to see the face of mercy.
at April 23, 2017