"In this dread act your strength is tried"

It's been a long time since I had a week as downright difficult as this week. I am eager to walk the Stations of the Cross this evening. Why so difficult? Is work going badly? No. Have I suffered a great loss? No. I did learn that Archbishop George Niederauer, who ordained me while serving as bishop of the Diocese of Salt Lake City, a man of whom I am very fond, is not doing well. In fact, he's close to passing over. Last Friday was the funeral for a brother deacon who was my classmate in diaconal formation. Today we celebrated the funeral Mass for one of our dearly beloved parishioners. Also, my best friend's Dad died today.

Of course, there was the utterly unconscionable chemical attack in Syria this week, our response to it, and with both the prospect of more innocent people being killed and forced to flee even as we protest taking in refugees. 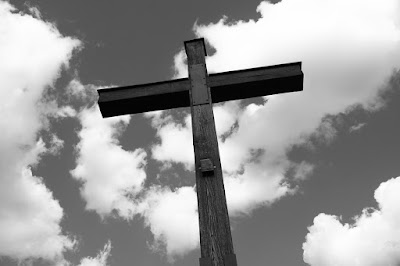 Martha said to Jesus, “Lord, if you had been here, my brother would not have died. [But] even now I know that whatever you ask of God, God will give you.” Jesus said to her, “Your brother will rise.” Martha said to him, “I know he will rise, in the resurrection on the last day.” Jesus told her, “I am the resurrection and the life; whoever believes in me, even if he dies, will live, and everyone who lives and believes in me will never die. Do you believe this?” She said to him, “Yes, Lord. I have come to believe that you are the Messiah, the Son of God, the one who is coming into the world” (John 11:21-27)

There is something about dealing with death makes me want to rebel. My rebellion is my audacious faith in Christ's resurrection. This faith, more precious to me that anything, is a gift from God. Without it I would be lost. It is only the Son of God hanging on the Cross that allows me to make sense of things, even as I realize my complicity in and guilt for Christ's death.

I love this passage from St. Paul's Letter to the Colossians:

And even when you were dead [in] transgressions and the uncircumcision of your flesh, he brought you to life along with him, having forgiven us all our transgressions; obliterating the bond against us, with its legal claims, which was opposed to us, he also removed it from our midst, nailing it to the cross; despoiling the principalities and the powers, he made a public spectacle of them, leading them away in triumph by it (Col 2:13-15- emboldening and underlining emphasis mine

Jars of Clay, singing one of my favorite hymns, "O Come and Mourn With Me Awhile" is our Friday tradito for this last Friday before that Friday we paradoxically call Good: