It doesn’t take too many years of preaching to figure out that preaching is probably one of the least effective ways to reach people. It seems to me that when it comes to the homily many people distract themselves mentally, waiting for it end, while others listen to it as a “talk,” or a prepared speech, designed to be of interest for the time it lasts with little or no lasting relevance.

No doubt there are reasons for these responses. In the first instance, one of the things Catholics in the pews report year-after-year is the need for preaching to improve. All of us have been subjected to inadequately prepared homilies, many of which seem endless and on never get around to making a point. It’s difficult to listen to such preaching. On the other hand, in a society that offers us so much constant entertainment, or what we might we might call infortainment, like TED talks and the like, we can easily privilege style over substance and grade the preacher on his performance, not giving it a thought beyond its entertainment value.

The reason for preaching is simple: to help you gain a deeper understanding of the Sacred Scriptures in order to better follow Jesus, or, perhaps stated a bit more plainly, to be clearer about where he is leading you. With regard to the readings for any given Mass or celebration of a Liturgy of the Word, there are a variety of different ways of getting the point(s) of the readings across. But Good Friday presents the preacher with a unique challenge because his job is to bring his sisters and brothers, as well as himself, face-to-face with the great mystery of our redemption.

Just as the church is stripped down on Good Friday, so must the preaching be. As we stand before the cross of Christ, which we always do here at St Olaf in a profound way, and prepare to venerate it in a few moments, the question is as simple as it is obvious: “Why the cross?”

Jesus did not go the cross in order to satisfy the anger, vindictiveness, or blood lust, of the Father. In other words, the Father did not inflict the punishment you and I deserve onto his beloved Son. In the branch of theology that concerns itself with Christ’s cross, which is known as soteriology (the study of how God saves us through Christ’s death), there are different atonement theories that have been set forth. What these theories seek to explain is precisely how Christ’s death reconciles us to God. Penal substitutionary atonement is one such theory. This theory holds that God imputed the guilt of our sins to Christ, and so he bore the punishment that we deserve. It is important to note that while this theory is widespread in the United States, it is not a Catholic understanding of the atonement. 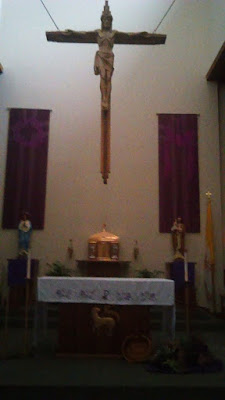 God did not predetermine that Jesus would have to suffer on the cross, just as God does not predetermine that any of us has to suffer on our own crosses. That would turn God into a cruel tyrant [and us into something like marionettes acting out a script]. What God did in the whole event of Jesus, in the incarnation and crucifixion, was to enter into the messy details of our world, a world marked by arbitrariness and unpredictability. The God who is nothing but unconditional Love, embodied and made visible in Jesus, lets the consequences of being Love in our flawed human world happen without evasion or avoidance. He did not turn away from pain and suffering. Perhaps we could say that through Jesus, pain and suffering are absorbed into the life of God, and, if absorbed, then finally transformed (The Dying of Jesus 52)

This transformation is one way to understand what is meant when, in our second reading from the Letter to the Hebrews, Jesus is described as our "great high priest." Just as a priest transforms bread and wine into the body and blood of Christ by the power of the Holy Spirit, Christ, in turn, transforms pain and suffering into salvation.

Jesus went to the cross out of love for the Father and you. And so, as scholar Terry Eagleton noted a number of years ago in a review of Richard Dawkins' book The God Delusion: “The central doctrine of Christianity, then, is not that God is a bastard. It is, in the words of the late Dominican theologian Herbert McCabe, that if you don’t love you’re dead, and if you do, they’ll kill you.”

My friends in Christ, this is what Jesus meant when he said that anyone who would follow him must take up his/her cross. It is not optional. One way or another the cross will find you. This is not in question. What is in question is whether you will bear the crosses that come your way for love of God and neighbor and do the work your baptismal priesthood calls you to, which is to work with Christ turning pain and suffering into salvation. The only way to resurrection is through the cross. Following Jesus is not a formula for worldly wealth, health, or even happiness as it is popularly understood. It is the way to salvation, which alone is true happiness, or so we dare to believe. A good way to think about faith, I think, is trusting that this is true. Hope, then, means living your life like it is true.
at April 14, 2017