Waiting for Gandalf on the eve of the Jubliee of Mercy

Having finished reading Tolkein's The Hobbit for the first time a few months ago with my 10 year-old son, we are now reading The Fellowship of the Ring. I took great heart from the fact that it was not until he turned 50 that Frodo Baggins began to experience a restless stirring, followed shortly by a visit from Gandalf.

It was not until Gandalf's visit, which came several years after his previous one and 20 years after Bilbo's dramatic departure from the Shire and renunciation of the One Ring, that Frodo learns what even Bilbo did not know. Gandalf, who spent at least 9 long years learning about the Ring, unfolds for the younger Mr Baggins just what it is, along with the inexorable power it exerts over its ostensible owner, and why it is ruthlessly sought after. Additionally, the wizard tells Frodo how he (Frodo) came to possess the Ring. He does so to aid the hobbit in grasping the imminent danger his possession of the Ring poses not only to himself, but the Shire.

As it turns out the dark lord, Sauron, now knows that the Ring is in the Shire and possessed by a Baggins from the now badly deformed hobbit-like creature who possessed the Ring prior to Bilbo: one Gollum, formerly known as Sméagol. Upon learning the true story of how Bilbo came to have the ring, Frodo laments to Gandalf that Bilbo did not kill Gollum when he had the chance. Gollum, while still known as Sméagol, obtained the Ring by murdering his companion Déagol, who found the Ring on the bed of the river Gladden while fishing as Sméagol practiced his strange subterranean botany. It is here that Gandalf's great wisdom is made most manifest. 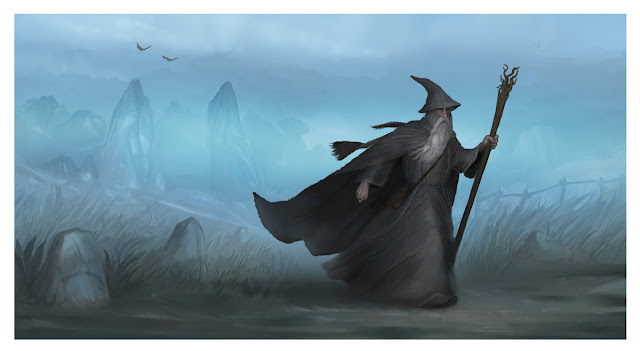 After listening to Frodo say, "What a pity that Bilbo did not stab that vile creature [Gollum], when he had a chance," Gandalf retorts, "Pity?" The wizard goes on to explain, "It was Pity that stayed his hand. Pity, and Mercy: not to strike without need. And he has been well rewarded . . . Be sure that he took so little hurt from the evil, and escaped in the end, because he began his ownership of the Ring so. With Pity."

Many that live deserve death. And some that die deserve life. Can you give it to them? Then do not be too eager to deal out death in judgment. For even the wise cannot see all ends

And so it seems that waiting for Gandalf differs from waiting for Godot because sooner or later Gandalf turns up. When he arrives things begin to happen, not things noticed by most people apart from those he quietly visits, at least not until the journey is over and the adventures are turned into legends. The adventure to which your are summoned is one you would never choose to undertake on your own and one you know up-front you can't complete by yourself. It is an adventure that stretches you not only to your limits, but, like Bilbo's adventure with the dwarfs, you are stretched well beyond your known and accepted limits, thus causing you to look at yourself in a new way.
at December 07, 2015

Email ThisBlogThis!Share to TwitterShare to FacebookShare to Pinterest
Labels: Community of the Heart, Cultural, Reflections and Ruminations