Cultural resistance: the time is now

Since, at 49-50, I am (finally) reading the works of J.R.R. Tolkein with my 10 year-old son (we read The Hobbit last year and we're working on The Fellowship of the Ring right now) I wanted to "get to know" Tolkein a bit better. To that end I began reading Mark Horne's J.R.R. Tolkein.

Horne writes about a club, founded while Tolkein was in his last year at King Edward school in Birmingham, just prior to his going to Oxford: Tea Club and Barrovian Society (T.C.B.S.). This group, all of whom, except Tolkein and Christopher Wiseman, perished in the Great War, strikes me very much as the precursor of the Inklings.

What grabbed my attention in Horne's account of the T.C.B.S. was his description of the kind of cultural resistance in which Tolkein and his companions sought to engage. It is, I believe, precisely the kind of resistance we need to engage in now with even greater fervor, especially with the fine arts and the humanities coming under such fierce assault. It seems obvious to me that this assault seeks to further erode our humanity by speeding up the arrival of an even less humane society by further eviscerating culture.

One aspect of the approach of the T.C.B.S. that I think extremely important is that its members agreed that their approach not be moralistic:

The vision of the T.C.B.S. was anti-secular and yet non-moralistic. To take one example, when Wiseman, Smith, and Gilson once met at a time Tolkien could not be with them, they complained together about how George Bernard Shaw and Henrik Ibsen had ended Victorian moralism in drama but left a vacuum. Ibsen had produced what were considered scandalous plays because they showed how immorality could and did sow destruction in respectable households. Shaw was influenced by Ibsen and wrote plays of social criticism. 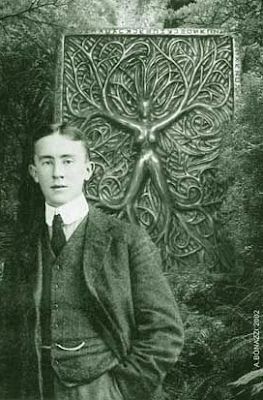 
The T.C.B.S. saw themselves as a response to such artistic trends. They would produce creative works that would "re-establish sanity, cleanliness, and the love of real and true beauty in everyone’s breast," according to G. B. Smith. Yet, as biographer John Garth has written, "Despite the crusading language, the TCBSian cultural and moral manifesto did not involve telling people what to do." This would be a lifelong commitment on the part of Tolkien, one that eventually brought him to change his mind about George MacDonald, whom he loved as a child, and decide that he was but an "old grandmother" who delivered sermons rather than stories. The T.C.B.S. moral vision was to invite the world to a meal instead of preaching at them

Such resistance is not stodgy in the least and is defiantly non-ideological.

A fine example of this is a recent piece on the 24/7 blog by Peter Greig, "The Defiant Hope of Rock Anthems...". In his post, Greig discusses the depth of some of the more meaningful contemporary music. In particular, he writes about U2 and Patti Smith performing together Patti's "People Have the Power" in response to the terror attacks in Paris last November.

In my view, Grieg, rightly describes Smith's song as "a 1988 punk-rock reworking of various eschatological longings for peace and justice expressed by the prophet Isaiah - see chapters 11 and 43, for example." Such "reworkings" are not rare. As with any art form there is good and bad, beautiful and horrendous, and everything in between.

Artists, like Patti Smith, U2, and others, work on the basis of a lot of assumptions as to what their listeners know. Painting with a broom, many cultural commentators blame all contemporary artists for this lack of knowledge. But that strikes me as quite wrong. In fact, I believe the opposite is the case: artists like Smith, U2, and many others working in the musical, literary, visual, and plastic arts do all in their power to conserve and hand along all that is worthy, often making worthwhile contributions of their own. Consider U2's song "Vertigo"- it begins: "Unos, dos, tres, catorce!" [not quatro]. Does this refer to first part, second book, third chapter, fourteenth verse = Exodus 3:14?

In any case, I think the task that lies before us is restoring and (dare I say?) even deepening our cultural/religious awareness. As we enter the new year, the relevant question for us, as it was for Tolkein and his young friends about 100 years ago, ought to be, How do we engage creatively?
at December 29, 2015

Email ThisBlogThis!Share to TwitterShare to FacebookShare to Pinterest
Labels: Community of the Heart, Cultural, Reflections and Ruminations