Nativity of the Lord: Mass During the Night

There is something strange, something mysterious about our gathering here in the dark of a winter's night. In the milieu in which we live, as Catholics in Utah, it is no doubt considered by many of our neighbors as downright weird. What makes our gathering mysterious, or sacramental, if not weird, is the Mystery that draws us here in order to draw us into Itself.

The word "manger" originates from the Latin word mandere, a verb meaning literally to chew, but more readily translated as “to eat.” Very often when we consider our Lord being laid in a “manger” we only think about the poor circumstances in which He was born that necessitated Him be placed in a feeding trough for animals instead of a cradle, or a bed. While such a consideration is certainly appropriate, there is another aspect we frequently ignore: the connection between Christ being laid in the manger and Him being laid on the altar under the appearance of bread and wine to be eaten and drunk by us. Given the centrality of the Eucharist in St Luke's Gospel, which reaches its culmination when the resurrected Lord was made known to the disciples whom He accompanied along the road to Emmaus “in the breaking of the bread” (Luke 24:13-35), this no fanciful leap.

Preaching on the Eucharist, Augustine observed, “what you see is simply bread and a cup - this is the information your eyes report. But your faith demands far subtler insight: the bread is Christ's body, the cup is Christ's blood” (Sermon 272). Indeed, this is a great mystery. This great mystery is only made possible by the mystery of the Father’s eternally begotten Son taking on flesh in the womb of the Blessed Virgin Mary and being born into the world. Because the Eucharist is the mysterium tremendum laid before us in a very ordinary way, it is not intuitively obvious to the casual observer that any transformation takes place, just as it was not obvious to the vast majority of those who encountered the Lord during His earthly ministry that He was not only the Messiah, but the very Son of God.

Those of a scientistic mindset demand that what happens in the Eucharist be made explicit and empirical, the satisfaction of which would reduce the mystery of God-made-man-for-us to a cheap magic trick. Such a demand, far from satisfying reason, falls far short of any reasonable inquiry into truth, into reality - the reason there is something rather than nothing. Note that I use “scientistic,” not scientific. Because faith and reason are not at odds, but are complementary, true science can account for the Eucharistic mystery. Those who practice true science can account for the Eucharistic mystery because they recognize it is only because of the mystery made manifest in the Eucharist that there is anything at all. By contrast, scientism is perhaps best understood as the uncritical application of scientific, quasi-scientific, or even pseudo-scientific methods to anything and everything. To borrow a phrase from Dr Michael Martin: “scientism is uncertainty masquerading as assurance.” The irony is this is exactly what those of a scientistic bent assert people of faith do. In the words of Albert Einstein: “The eternal mystery of the world is its comprehensibility.” Nonetheless, a person of genuine faith grasps, as did Einstein, that she can never reduce the Mystery to her measure.

It's important to grasp that the mystery of God becoming man in the womb of a virgin and becoming bread and wine for us are not two mysteries, but one Mystery. It's equally important to understand the words “sacrament” and “mystery” are synonymous. These words refer to the same thing, namely our encounter with the living God, which encounter is only possible because of the Incarnation, when eternity stepped into time, when infinity inhabited finitude. 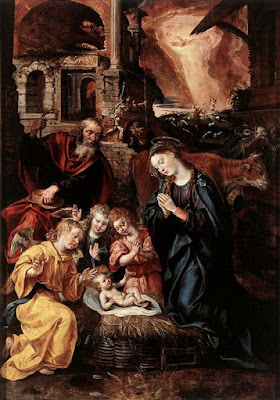 The late Catholic theologian Edward Schillebeeckx, in his still important book, published 50 years ago, Christ the Sacrament of the Encounter With God, expressed his belief that sacraments should not be consigned merely to dogmatic theology, or even the study of liturgy. Instead, he insisted that sacraments are “the properly human mode of encounter with God.” All human encounters with God, according to Schillebeeckx, are at least implicitly sacramental. In other words, our encounters with God are not immediate, but mediated. So the bread and the wine are the media, the primary way, we encounter God through Christ in the power of the Holy Spirit.

Turning back to St Augustine we can grasp this better:

these realities are called sacraments because in them one thing is seen, while another is grasped. What is seen is a mere physical likeness; what is grasped bears spiritual fruit. So now, if you want to understand the body of Christ, listen to the Apostle Paul speaking to the faithful: “You are the body of Christ, member for member” (1 Cor. 12:27). If you, therefore, are Christ's body . . . it is your own mystery that is placed on the Lord's table! It is your own mystery that you are receiving (Sermon 272)

Our resurrection, our rebirth, which cannot happen apart from the Incarnation, is God's work of grace, not something we deserve, let alone something we could do for ourselves. We don't make the Eucharist. The Eucharist makes us. St Augustine exhorted: “Be what you see; receive what you are” (Sermon 272). This transformation is well-described by the prayer that is uttered sotto voce as the water is poured into the wine at the altar: “By the mystery of this water and wine may we come to share in the divinity of Christ who humbled himself to share our humanity.” The only empirical evidence that the bread and wine become the body and blood of Christ our Lord are the transformed lives of those of us who partake of it.

Tonight, when you come forward to receive Christ, make your hand the manger from which you will eat the Mystery who not only made us, but came to incorporate us into Himself.
at December 24, 2015