On the Feast of Stephen

Today is the Feast of St Stephen. It is my saint day because "Stephen," being my father's name, is my middle name from birth. When I was baptized and confirmed at age 24, I kept Stephen as my Christian name. Then there is the matter of my being a deacon.

Stephen, who was likely a Greek-speaking Jew, was one of the seven men set apart by the apostles to the serve the early Christian community in Jerusalem (see Acts 6:1-7). The issue that gave rise what is traditionally, going back at least to St Irenaeus of Lyons, who lived from the early second century to AD 202, viewed as the institution of the diaconate, was the dispute that arose because the Greek-speaking members of the early Jerusalem community, who lived communally and shared all things in common, started to complain that Greek-speaking widows were receiving the short-end of the stick in the daily distribution.

Commenting on the names of the seven men on whom the apostles laid hands, done in the context of writing about the expulsion of the Greek-speaking from Jerusalem, the late New Testament scholar Martin Hengel observed,

With the exception of Philip and Nicanor, the list of the 'seven' in Acts 6:5 does not contain any of the typical Jewish names which are attested for, say, [in] Egypt or Palestine. Simply from the exclusively Greek names, one might suppose that the 'seven' came from abroad, the last of them, the proselyte Nicolaus, is said to have come from Antioch (Acts and the History of Earliest Christianity, 71)

Of the "seven" we only learn more about Stephen and Philip. Stephen's story, which culminates with his martyrdom, thus making him proto-martyr, is conveyed in Acts 7. 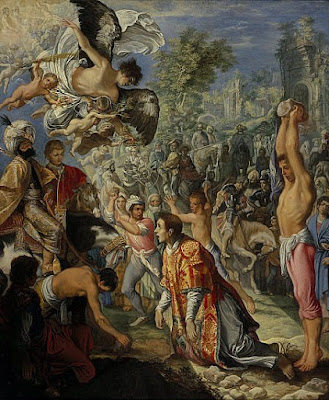 The sacred vestments that the ministers are wearing at the altar are no longer the immaculate white of yesterday. They are red, the symbol of blood. Next to the sweet contemplation of a God-child warmed by His Mother’s love, what a contrast is the vision of Stephen dying under the pelting hail of stones, covered with blood! With what horror our thoughts move from the angels’ song and the affectionate faces of the shepherds to the shouting figures of Stephen’s stoners, throbbing with hatred!

But this juxtaposition is dense with meaning. In the dazzling light that surrounds the stable in Bethlehem, we perceive the majestic outline of the Cross...

The lesson of Christmas and St Stephen is a lesson of sacrifice, but what is the way we can be able to live it? St Stephen indicates it to us with his impassioned devotion to the Lord Jesus. This is how it could be expressed: "You must not feel alone" (see "Fr. Giussani on St. Stephen, 1944")

Bl Pope Paul VI sagely taught, "Modern man listens more willingly to witnesses than to teachers and if he does listen to teachers, it is because they are witnesses." "Martyr" is simply the Greek word for witness. From the beginning of our holy order, deacons have been uniquely situated to bear witness to our Lord Jesus Christ through sacrifice. Our witness, brothers, is needed as badly today as ever.

St Stephen is the patron of this blog and has been practically from the beginning. My mission here remains "to foster Christian discipleship in the late modern milieu in the diakonia of koinonia."