"the full force of love's glory" 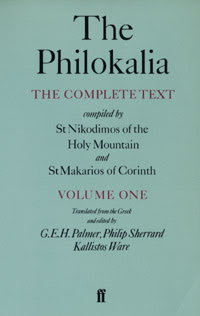 St. Diadochos of Photiki (ca. 400-ca. 485), in his work On Spiritual Knowledge, wrote something that I find very enlightening, especially in response to Kiekergaard's account of Abraham's willingness to sacrifice Isaac in Fear and Trembling:

"Faith without works and works without faith will both alike be condemned, for he who has faith must offer to the Lord the faith which shows itself in actions. Our father Abraham would not have been counted righteous because of his faith had he not offered its fruit, his son (James 2:21; Romans 4:3)

"He who loves God both believes truly and perfoms the works of faith reverently. But he who only believes and does not love, lacks even the faith he thinks he has; for he believes merely with a certain superficiality of intellect and is not energized by the full force of love's glory. The chief part of virtue, then, is faith energized by love" (Philokalia, vol 1, pg. 258)

In this passage, he argues against the all too common reduction of faith to mere belief. Faith in God through Christ when conceived of mere as belief is an abstraction, an intellectual exercise, while our intellect must consent and see that what we believe is harmonious with reason, if we stop there, we pull up far short of destiny. Here, too St. Diadochos teaches us:

"The loving and Holy Spirit of God teaches us, as we have said, that the perceptive faculty natural to our soul is single; indeed, even the five bodly senses differ from each other only because of the body's varying needs. But this single faculty of perception is spilt because of the dislocation which, as a result of Adam's disobedience [original sin], takes place in the intellect through the modes in which the soul now operates" (pg. 260).

This is why we make weird distinctions, like subject/object and faith/works. Divine love overcomes all barriers erected by sin, original and personal.

Along with Fr. Thomas Kraft, OP, I commend Fr. Richard John Neuhaus, who is in hospital undergoing treatment for cancer as we enter this new year, to your prayers. Fr. Neuhaus is the founder and editor-in-chief of the journal First Things. I do not know him personally, but I have benefitted tremendously over the years from his sage insight and his wry wit.
at December 31, 2008