I don't know about where you live, but here along the Wasatch Front of Northern Utah we're still in the dead of winter. When you live somewhere that has a "dead of winter" you know what that phrase means experientially: the skies are medium to dark grey, all the trees are dead and leafless, the snow looks worn-out and dirty, due to the moisture in the cloud cover, it's more humid than normal and so colder. It's a bit like Narnia under the spell of the White Witch, who decreed it should be always winter but never Christmas, except the whiteness has turned a brownish hue. I spent three days this week in Northern Alabama. Even there it was cloudy, windy, rainy, and cold. After experiencing a fairly long sequence of such days, it's easy to believe that spring will never arrive.

Add to the weather earthquakes. Shortly after 5:00 AM this morning, about two miles south of Bluffdale, Utah there was an earthquake measuring 3.2 on the Richter Scale and another one that pushed the needle to 3.7. They were far enough away that we did not feel them where I live (north and one valley away) but not so far away that they don't make me a bit anxious.

I am firmly convinced that in explaining to his closest disciples what signs will portend the end of the world, Jesus was being ironic, if not a bit sarcastic (Gasp!). When you consider the things he tells them to look for- wars, rumors of wars, natural and man-made disasters, catastrophes of various kinds, including earthquakes, he is describing life in the world. Can you think of an historical era in which such things weren't the stuff of human life? His point? God is on his way and these things are his chariot. 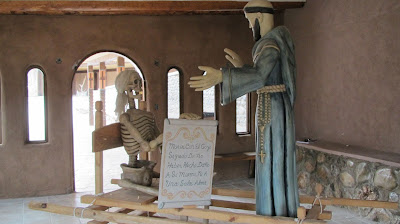 From Chimayo, New Mexico during Holy Week, Sister Death holds a placard toward St. Francis’s outstretched arms, which reads: "To die with the sacred joy of not having done harm to oneself nor to a single soul."


Due to having a million and one things going on, I neglected to put up a traditio last Friday. If I had, it would've been the one I am offering today: Oingo Boingo's "We Close Our Eyes." For me, this song is a hymn:

St. Francis called her "Sister Death." Today it is easy to memento mori, that is, to remember death.

Shortly after Christmas, I listened to an episode of the Jesuitical podcast that featured Pauline Sister Theresa Aletheia, who keeps a skull on her desk, as guest. Sr. Theresa Aletheia insists that rather than being morbid, reflection on death "is a healthy and often healing practice that helps us accept the inevitable with hope." To paraphrase something Eric Idle said in the lead up to the Monty Python troupe's final public performances a few years back: We're only here for, like, ten minutes. As my Dad lay dying on a cold winter day just a bit more than 8 years ago, he was recalling some childhood memories with his many cousins. He stopped and looked at me with his pale blue eyes and said, "It goes by fast."

There is some good news today. I see patches of blue sky this morning, which promises at least some sunshine. Hopefully enough to go for a walk and pray the Rosary. Even though it's Friday, which in my old-fashioned way, I observe as a day of penance, I am inclined to meditate on the Glorious Mysteries. As a friend wrote to me in a letter about this time last year: "Easter is coming. Easter is always on its way." I need some Easter today.
at February 15, 2019