A deacon on a layman about deacons

This morning, a friend of mine, who is also a Roman Catholic deacon, brought to my attention something Karl Keating, founder of Catholic Answers, posted on Facebook about deacons:


ON A DEACON AND DEACONS

I just read a piece by a deacon who claims that nobody--nobody at all--is confused by Pope Francis.

Isn't it a sufficient refutation to note that many people claim to be confused by things the pope has said or written? Even intelligent people? Even high clerics?

Or are all these people nobodies?

There are notable exceptions, but, on the whole, over the years I have been disappointed with homilies given by, and essays or posts written by, deacons.

I've been disappointed with plenty of things said or written by bishops, priests, and laymen, but the proportion has been notably worse with deacons. I'm not sure why that should be, but that's how it's been.

This isn't a new observation for me. It's been nagging me for well over twenty years, and it applies even to many deacons who are well degreed.

I suppose I first noticed it when, after a parish seminar I gave, a deacon came up to me and proudly noted that he never read religious books published before 1965, the year that Vatican II ended. (I wasn't quick-witted enough at the moment to ask him whether he ever read the Bible.) After that, I began to pay more attention to what deacons said and wrote.

It seems that in many cases men have been ordained beyond their ability to speak or write cogently--or even adequately. I appreciate what deacons do in parishes, but I remain largely disappointed in deacons who go public. I wish it were otherwise, but that's how it is for me.

[Watch for it. I will get complaints from fine deacons who don't contribute to this impression of mine. They will be unnecessarily defensive, imagining they have to defend the entire brotherhood. They don't. I'm not referring to them but to what seems to me to be the generality of deacons.]

If I am not mistaken, Keating's post is a response to something Deacon Bill Ditewig, Ph.D. (he holds a doctorate in theology from the Catholic University of America) posted on his blog, Deacons Today. However, I cannot be sure exactly to whom Keating is responding because his post is in that passive-aggressive mode so commonly employed on social media.

Fr. Weinandy's tenure as executive director was quite tumultuous and marked by public disputes with some of the U.S.'s more prominent theologians, like Sr. Elizabeth Johnson. Since the conclusion of his directorship, Fr. Weinandy has served as a consultant to the U.S. bishops doctrine committee. In the wake of his letter he resigned. 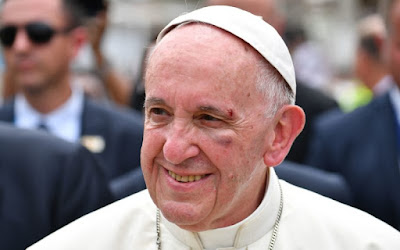 As noted, Keating's post is thoroughly passive-aggressive. In his view, with "notable exceptions" (no doubt few) deacons are, theologically-speaking, below par. Despite Karl Keating's views, it is important to point out that, as clerics, deacons are ordained to represent the Church publicly. This does not mean our public words are in any way magisterial. In this way, deacons are like priests. We don't even speak on behalf of our bishop unless expressly deputed to do so. There is a tab at the top of this entitled "Integrity Notes." It is my disclaimer.

Along with "some notable exceptions," Keating acknowledges that some deacons "do not contribute to [his negative] impression" of not being capable of speaking or writing cogently or correctly. Some of these, he surmises, might take umbrage at his assertions regarding deacons and become defensive. He assures his readers that he is not out to offend the notable exceptions or those who do not contribute to his negative impression. He is merely trying to criticize most permanent deacons, at least most of those he has heard speak and preach and/or whose writing he's read over the past 20 years.

What I find lacking cogency is Keating's purely anecdotal argument that many, perhaps most, permanent deacons are in over their heads when the issue he sought to dispute was his assertion that Ditewig argued nobody at all is confused by anything that Pope Francis has spoken or written. If that is the case, if people, even notable people, like bishops, are confused by some of the Pontiff's public utterances and written proclamations, then wouldn't a few notable examples serve to make his case?

Ditewig's point, it seems to me, was not really that nobody claims to be confused by Pope Francis. There are certainly those who claim confusion. What Ditewig points to is the elephant in the room: those who claim the Pope is spreading confusion are those who simply disagree with him, those who dissent from his properly exercised papal magisterium. It has become a common tactic of the Holy Father's detractors to claim he is confusing people. Ditewig challenges their assertion by claiming people, on the whole, really aren't confused.

In my view, it is the cacophony of Francis detractors, each of whom presumes, even if implicitly, to speak with authority superior to the Pope and bishops, who confuse the faithful. This makes me all the more thankful that the genuine sheep are able to hear and recognize the voice of their shepherds.

As a deacon likely not fit, at least in Keating's view, to hold forth in public, I also think that what the Church needs is evangelists, not more self-styled "apologists." An evangelist is a witness, not a didactic Cathsplainer (Catholic version of mansplaining). As Bl. Pope Paul VI put it in Evangelii nuntiandi:


Above all the Gospel must be proclaimed by witness. Take a Christian or a handful of Christians who, in the midst of their own community, show their capacity for understanding and acceptance, their sharing of life and destiny with other people, their solidarity with the efforts of all for whatever is noble and good. Let us suppose that, in addition, they radiate in an altogether simple and unaffected way their faith in values that go beyond current values, and their hope in something that is not seen and that one would not dare to imagine. Through this wordless witness these Christians stir up irresistible questions in the hearts of those who see how they live: Why are they like this? Why do they live in this way? What or who is it that inspires them? Why are they in our midst? (par 21)

Should Catholics be well catechized and able to intelligently discuss our faith when appropriate? Yes. Who would argue otherwise? This brings us to a question that is a different topic entirely: What is catechesis? I will state that catechesis which leads to the kind of witness Christians are called to give is mystagogical.
at November 03, 2017