Exercising diakonia: being a servant

Our readings for this Sunday culminate with the last two statements made by the Lord in today's Gospel: "The greatest among you must be your servant. Whoever exalts himself will be humbled; but whoever humbles himself will be exalted" (Matt 23:11-12). These words could easily serve as a compelling homily on these readings. As a deacon, I like to think I am attuned to passages like this that exalt the importance of serving others.

In the original Greek, the final word of the eleventh verse of the twenty-third chapter of St. Matthew's Gospel, a word translated as "servant," is diakonos. It would not be any exaggeration at all, but a very literal translation of that verse to be translated in this way: "The greatest among you must be your deacon." Christ is the model Deacon. If a deacon, by the grace received through the Sacrament of Orders, acts in the person of Christ, it is not in persona Christi captis, a way in which only bishops and priests act, but in persona Christi Servi- in the person of Christ the Servant. Jesus was the greatest among those whom he addressed in today's reading. Hence, He is their Servant, their Deacon.

Diakonia, the name for the service rendered by deacons, is something every Christian is called to do. If we share in the one priesthood of Jesus Christ by virtue of Baptism, then we also share in the one diaconate of Jesus Christ. We are God's priestly people because we are God's deaconly people. As James Keating noted in his book The Heart of the Diaconate: "There can be no sacrifice (priesthood) without service (diaconate)." While this is rather abbreviated, I think it goes back to the insistence of Old Testament prophets that sacrifice is unacceptable to God without selfless service to others, particularly and specifically helping those in need.

As regards the Eucharist as sacrifice, Christ gives himself to us so that we can give ourselves to him by selflessly serving others. At the end of the day, the only convincing proof that the bread and wine are the Body and Blood of Christ are the lives of those eat and drink it. Moreover, service before sacrifice was modeled perfectly by our Lord himself. 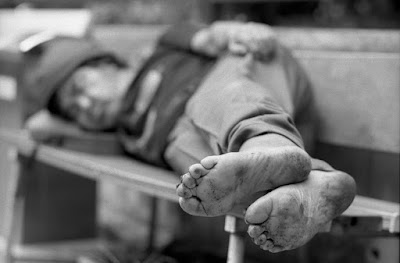 Our second reading is from St. Paul's First Letter to the Thessalonians. Dating from around AD 50, it is most likely the earliest New Testament book. In this passage, the Apostle provides a concrete example of what the Lord taught. What Paul highlighted to the Christians in ancient Thessaloniki is that while he was among them, in addition to preaching, teaching, and exercising pastoral care, he worked and earned his living by his own hands so as not take from them. not to be a burden to them. The earliest Christian communities consisted largely of the urban poor. Elsewhere Paul asserts his right to be supported by the Christian community (1 Cor 9:4-15). He usually, or maybe even always, forfeited this right and worked as a "tent maker," the nearest contemporary equivalent to which would be a canvas and awning business. In this way, as well as others, Paul engaged in diakonia. Hence, the Apostle imitated his Master by being their deacon, their servant.

A diakonos is distinct from a doulos. As mentioned, a diakonos is a deacon, which denotes a type of servant, whereas a doulos is a slave. Paul calls himself a slave only in reference to Christ. In his Second Letter to the Corinthians he wrote that he was their slave, but only for Jesus's sake (2 Cor 4:5). Paul thought of himself as the slave of Christ, a slavery he chose in freedom and to which he continued to adhere out of the same freedom. It was as Christ's slave that he became the servant to those Christians in the communities he founded.

Diakonia is the selfless service rendered to others, particularly those in need, in the name of Christ. Providing such service is how we make Jesus present, how we proclaim his Gospel, how we glorify him by our lives.
at November 05, 2017