In a letter to his son Christopher written in the summer of 1943, J.R.R. Tolkien expressed his views on politics:


My political opinions lean more and more to Anarchy (philosophically understood, meaning abolition of control not whiskered men with bombs) – or to ‘unconstitutional’ Monarchy. I would arrest anybody who uses the word State (in any sense other than the inanimate realm of England and its inhabitants, a thing that has neither power, rights nor mind); and after a chance of recantation, execute them if they remained obstinate! If we could get back to personal names, it would do a lot of good. Government is an abstract noun meaning the art and process of governing and it should be an offence to write it with a capital G or so as to refer to people. If people were in the habit of referring to ‘King George’s council, Winston and his gang’, it would go a long way to clearing thought, and reducing the frightful landslide into Theyocracy. Anyway the proper study of Man is anything but Man; and the most improper job of any man, even saints (who at any rate were at least unwilling to take it on), is bossing other men. Not one in a million is fit for it, and least of all those who seek the opportunity (Letters of J.R.R. Tolkien 74)

In summer of 1991, in the midst of his first elected term of what was then still Czechoslovakia, Václav Havel expressed the following views:


I am convinced that we will never build a democratic state based on rule of law if we do not at the same time build a state that is - regardless how unscientific this may sound to the ears of a political scientist - humane, moral, intellectual and spiritual, and cultural. The best laws and the best-conceived democratic mechanisms will not in themselves guarantee legality or freedom or human rights - anything, in short, for which they were intended - if they are not underpinned by certain human and social values... What use would elections be in which the voter's only choice was between a greater and lesser scoundrel? What use would a wide variety of parties be if not one had the general interest of society at heart? (Summer Meditations 18)

The two questions Havel asked are, of course, rhetorical, the answer to both being, "No use whatsoever." 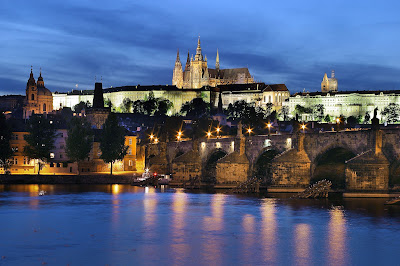 
Havel, expounding on Tolkien's conception of the state, continued: "No state - that is, no constitutional, legal, political system - is anything in and of itself, outside historical time and social space. It is not the clever technical invention of a team of experts, like a computer or a telephone. Every state, on the contrary grows out of specific intellectual, spiritual, and cultural traditions that breathe substance into it and give it meaning" (Summer Meditations 19).

I don't share Tolkien's preference for unconstitutional monarchy, which I see as the apotheosis of "Theyocracy," rooted as it normally is in the notion of divine right of kings. As far as I can tell, the anti-Christian notion of the divine right of kings is a pagan hangover from the Roman empire. Instead of being divine himself, the king becomes God's anointed, like David, which has very troubling messianic overtones. The Christian response to Caesar is Lord, Son of God, and King of kings, is Jesus is Lord, Son of God, and King of kings. Given what Havel wrote about states growing out of specific historical and social conditions, I am fine with constitutional monarchies, which "breathe substance" into certain modern European states by connecting them with their "intellectual, spiritual, and cultural traditions." On the other hand, I am very sympathetic to the anarchy Tolkien espouses and which he seems to give priority over unconstitutional monarchy. Proof of this priority, I think, can be found in the governance of The Shire.

As a citizen of the U.S., a country built on the explicit rejection of monarchy, viewed by this nation's founders as inherently tyrannical, I shudder as I ponder Hillary and Donald, plus their respective gangs, who no doubt believe themselves possessed of the technology to re-invent our state.

* After posting this initially yesterday, I realized it needed more work. After re-working it, I also swapped the original picture, which was Blink 182's cover for their 1999 album Enema of the State for this lovely photo of Prague Castle. Dear God, how did I become so respectable?
at October 01, 2016

Email ThisBlogThis!Share to TwitterShare to FacebookShare to Pinterest
Labels: Community of the Heart, Politics, Reflections and Ruminations