I believe in miracles

It is impossible to read about Saint Pio of Pietrelcina, more popularly known as Padre Pio, without reading accounts of many miracles. Nothing makes some people more uncomfortable than a miracle, than the idea of miracles, than the thought that God at times and quite unpredictably directly and inexplicably intervenes in the world at the behest of someone. Among those made uncomfortable by miracles and miracle-workers are theologians, especially of the systematic variety. Miracles and miracle-workers tend to disrupt their carefully constructed reality, to challenge their theories, which have room for the divine, but only so much. I don't believe it's too strong to assert that, at least for some, God's intervention in the world is viewed as interference, or undue influence. They create space for God in their accounts of reality, but place fairly strict limits on the amount they're willing to grant Him. 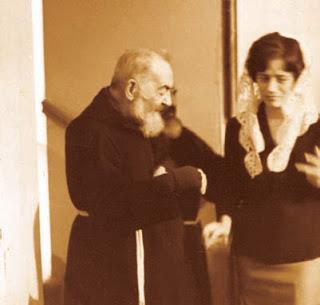 
In his book Two Sisters in the Spirit: Thérèse of Lisieux and Elizabeth of the Trinity, Hans Urs Von Balthasar noted:

In modern times, theology and sanctity have become divorced, to the great harm of both. Except in a few cases, the saints have not been theologians, and theologians have tended to treat their opinions as a sort of by-product, classifying them as spiritualité or, at best, as théologie spirituelle. Modern hagiographers have contributed to this split by describing saints, their lives and their work almost exclusively from a historical and psychological viewpoint, as though they had no bearing upon the task of theology. This task, however, demands corresponding alterations in method: rather than consider the psychological unfolding from below, it should work out a sort of supernatural phenomenology of their mission from above

Fr. Marcello Iasenzaniro, in his his book The "Padre," St. Pio of Pietrelcina: Charismatic Priest, pauses in the midst of many accounts of the miracles Padre Pio worked on behalf of people to attempt a brief explanation of the role miracles play in Church and in the world. It is not a quaint, outdated, or silly thing for verified miracles to normally be required by the Church for the beatification and then canonization of a saint. Sometimes the proliferation of miracles, like the many worked by Venerable Matt Talbot on behalf of former alcoholics and addicts, are difficult to capture and verify, yet they happen. I hope, as he did for the canonization of Good Pope John, Pope Francis proceeds to beatify Venerable Matt, perhaps during his visit to Ireland next year. It's also good that the Congregation for the Causes of Saints still seeks testimony against the canonization of someone. For example Christopher Hitchens and Aroup Chatterjee, both harsh critics, both gave testimony against canonizing St. Teresa of Calcutta. Any testimony critical of a claim of a miracle is also included.

First of all, Fr. Iasenzaniro, observed, a miracle "is an intervention of God, which is visible and verifiable and indicates that He is present in the [midst] of his people and works for their well-being." By verifiable, I take him to mean that what occurred can be shown to really have happened and that it defies natural explanation. Taking his cue from Dostoevsky perhaps, he understands miracles largely, though not exclusively, as means God uses to strengthen faith, not produce it. In other words, faith precedes the miracle. Iasenzaniro went on to assert, A miracle "also educates Christians to see all the happenings of life in the light of faith and to live faith itself better." Citing the contemporary spiritual master, Fr. Raniero Cantalamessa, who, like Padre Pio, is a Franciscan of the Capuchin order, he seeks to strengthen the relationship between the miraculous and the every day: 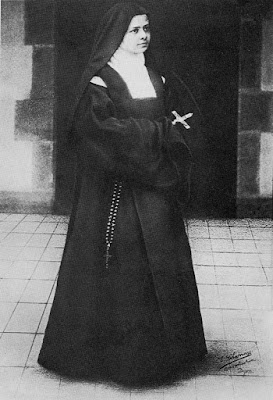 St. Elizabeth of the Trinity

In Divine [interventions], a miracle serves to break routine; it impedes [one acting] in a repetitive ritualistic way that reduces all to "half-baked notions of human customs"; produces an examination of the conscience, keeping ["awe," or "wonder"] alive which is indispensable in [one's] relationship with God. The actual miracle helps one grasp the habitual miracle of life and being, in which we are immersed and easily take for granted and [render banal]. At the same time it helps to confound "the knowledge of knowledgeable", that is put in a healthy crisis the pretext that reason can explain all and refuse all that is [inexplicable]. It breaks both ritualism and dry rationality. In a biblical sense, it serves to uplift and not to lower the quality of religiosity [I have sought to improve the translation with my words in brackets]

It's easy to see the complementarity between what Von Balthasar wrote about the saints and the use of Cantalamessa's insight concerning miracles by Fr. Iasenzaniro. Frankly, any theologian whose theology either dismisses these two insights or refuses to address them is wholly inadequate to the task s/he undertakes. One might go to the extreme and argue that such theologies are attempts at reducing the Mystery to our measure. After all, what is a miracle but the in-breaking of the Mystery for those with eyes to see and ear to hear?

What moves us to believe is not the fact that revealed truths appear as true and intelligible in the light of our natural reason: we believe "because of the authority of God himself who reveals them, who can neither deceive nor be deceived". So "that the submission of our faith might nevertheless be in accordance with reason, God willed that external proofs of his Revelation should be joined to the internal helps of the Holy Spirit." Thus the miracles of Christ and the saints, prophecies, the Church's growth and holiness, and her fruitfulness and stability "are the most certain signs of divine Revelation, adapted to the intelligence of all"; they are "motives of credibility" (motiva credibilitatis), which show that the assent of faith is "by no means a blind impulse of the mind" (par. 156)

According to Padre Pio is not enough to say that faith precedes the miracle. Faith must be put into practice by means of fervent and frequent prayer. This how you put yourself into the hands of God, it is how you surrender. One Nina Campanile reported that Padre Pio once told her: "The Lord is ready to do miracles, but there is a lack of faith." Getting back to something noted by both Von Balthasar and Cantalamessa, Padre Pio also averred that God, in His mercy, withheld miracles from the learned in order "to not make the scholars more responsible" when they faced judgment. 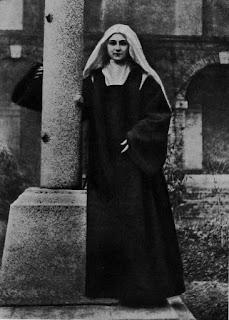 To profess belief in miracles in the manner urged above is not to believe we can manipulate God, or that God will answer every faithful prayer according to the desires of the one praying. Implied in every petition to God is that act of surrender uttered by our Lord Himself during his agony in the garden: "not my will but yours be done" (Luke 22:42). Many times, when asked, Padre Pio did not give the petitioner his/her desired answer.

Speaking of miracles, Bob Dylan won the Nobel Prize for Literature. This will be reflected in to tomorrow's Friday traditio.

Email ThisBlogThis!Share to TwitterShare to FacebookShare to Pinterest
Labels: Community of the Heart, discipleship, I believe, Saints, Theology