At least in my mind, which is an odd place no doubt, some things, some people seem completely incongruent. This incongruency is often dissolved by juxtaposing (like "penultimate," how can I ever pass up the opportunity to use "juxtaposing"?) two seemingly incongruent people, things, ways of thinking. What gave rise to these deep diaconal thoughts? Reading yesterday from two books: Summer Meditations by Václav Havel and the poorly translated (from Italian), but still well worthwhile, The "Padre", Saint Pio of Pietrelcina, Charismatic Priest. In my reading I noticed not so much a convergence, but a certain continuity. This post is nothing more than an attempt at making a connection.

I will begin with passage from Havel that struck me. He wrote Summer Meditations in the summer of 1991 after he had been duly elected as president of what was then still Czechoslovakia. The book consists of five meditations. Yesterday I began reading the third meditation: "What I Believe." 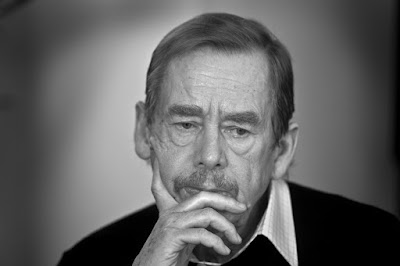 The attempt to unite all economic entities under the authority of a single monstrous owner, the state, and to subject all economic life to one central voice of reason that deems itself more clever than life itself, is an attempt against life itself. It is an extreme expression of the hubris of modern man, who thinks that he understands the world completely - that he is at the apex of creation and is therefore competent to run the whole world; who claims that his own brain is the highest form of organized matter, and has not noticed that there is a structure infinitely more complex, of which he himself is merely a tiny part: that is, nature, the universe, the order of Being

Havel goes on to point out that "Communist economics was born of an arrogant, utopian rationality that elevated itself above all else." Capitalism, so called, runs the same danger, even as it does not seek to organize everything under the state. Multi-national corporations merit analysis under the rubric of an economy for people, not people for the economy. Elevating theory, what is abstract, over what is real, or concrete, such "pseudo-scientific" utopias, according to Havel, lose a sense "of the enigma of life, and lack humility before the mysterious order of Being," which leads to the "turning away from moral imperatives 'from above' and thus from human conscience." 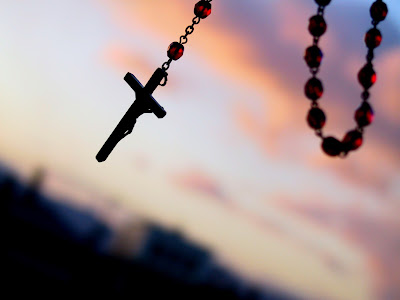 A chemically pure theory is incompatible and practically unrealizable. Life is - and probably will always be - more than just an illustration of what science knows about it. There is no such thing as a "pure system", anywhere. Social life is not a machine built to any set of plans known to us - which is why new theories are constantly being fashioned: the flow of life, which is always taking us by surprise, is the only permanent challenge to the human spirit to strive for new achievements

While agreeing that scientific analysis should be used by policymakers, Havel insisted two things must always be kept in mind when doing so:

In the first place, scientific knowledge can serve life, but life is certainly not here merely to confirm someone's scientific discoveries and thus serve science. And in the second place, science may be a remarkable product and instrument of the human spirit, but it is not in itself a guarantee of a humane outcome. A familiar example: science can lead people to discover atomic energy, but it cannot guarantee that they will not blow each other up

October, as both my readers know, is a month dedicated to the Most Holy Rosary of the Blessed Virgin Mary. St. Pio of Pietrelcina taught: "Hold on tightly to the Rosary. Be very grateful to the Madonna because it was she who gave us Jesus. Love our Lady and make her loved; always recite the Rosary and recite it as often as possible." Padre Pio never tired of urging and exhorting everyone, no matter his/her state of life, to pray always. To a group of priests who visited him in June 1955, he urged them to pray, telling them prayer is "the only way to save the world." To a group of young male students he said, "Young men, study, but most of all pray! Prayer alone can save souls." 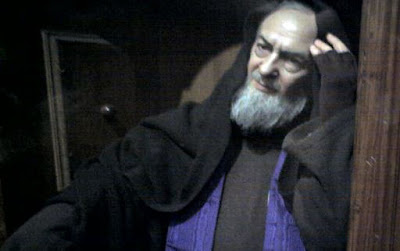 Padre Pio in the confessional


Prayer is the way we engage the mystery of Being. Through prayer we learn the point of existence. Prayer enables, empowers, our humanity. Through prayer we develop an immunity to ideology and develop resistance to "chemically pure" theories by remaining humble "before the mysterious order of Being," which is but another name for God. We should have the utmost veneration for she through whom the Mystery became flesh.