Leonard Cohen on the ascesis of marriage

I am currently reading Sylvie Simmons' I'm Your Man: The Life of Leonard Cohen, which was published in 2012. At 82, Cohen is still alive . In fact last Friday, 21 October, his eighty-second birthday, he released a new album: You Want It Darker. Cohen is certainly not a model of monogamy and commitment when it comes to his relationships with women. But I was struck the other evening when I read what Cohen had to say about marriage at the time he was having the second of his two children with Suzanne Elrod and feeling a little trapped while living quite domestically with her in Montreal. During this time he was interviewed by journalist Malka Marom for the CBC. The interview took place in a garden shed in back of Cohen's house, which he had converted into a writing room. Marom recalled, "Soon after I set up the recording equipment, Leonard's hand went right underneath my skirt." Apparently that was as far as it went and Marom didn't feel threatened. According to Simmons, after Cohen's blatant act, Marom "asked him about his views on marriage and monogamy, given the imminent arrival of his second child with Suzanne." Cohen responded: 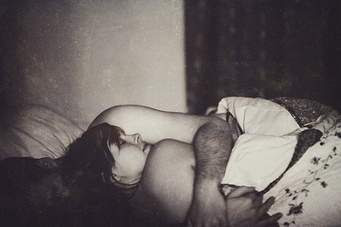 I think marriage is for very, very high-minded people... It is a discipline of extreme severity. To really turn your back on all the other possibilities and all the other experiences of of love, of passion, of ecstasy, and to determine to find it within one embrace is a high and righteous notion. Marriage today is the monastery; the monastery is today's true freedom

Cohen admitted that it was cowardice and fear that prevented him from marrying the mother of his children.

Our Friday traditio is the title track off Cohen's new album, "You Want It Darker," which I can only describe as a song about an undeniable dimension of love. This track was produced by his son, whose mother is Suzanne:

Also featured on the track are Gideon Zelermyer, a Jewish Cantor from Cohen's hometown, Montreal, and the Shaar Hashomayim Synagogue Choir. The chanted Hebrew word you hear in the song transliterates as either Hineni or enni, and translates as "Here I am." It is a word addressed to God by Moses in Exodus 3:4 when God calls him by name from the burning bush, saying, "Moses, Moses." It is also spoken by Isaiah to God after he hears God ask, "Whom shall I send, and who will go for us?"
at October 28, 2016