Since I have already posted on the Lord's Epiphany, his revelation to the nations, I feel free to compose something free-form about the Gospel reading for today's solemnity. As I was preparing to proclaim and as I was proclaiming today's Gospel (Matt 2:1-12) in the Eucharistic liturgy, I was struck - lectio-style - by a phrase I had previously just read over without giving it much thought. The phrase occurs in the third verse of the second chapter of the Gospel According to St. Matthew. The immediate context is the magi telling King Herod learning that they were seeking "the newborn king of the Jews" (v. 2): "When King Herod heard this," the inspired author conveyed, "he was greatly troubled, and all Jerusalem with him."

The phrase that caught my attention this Epiphany, thus making it an epiphany for me, is the last phrase of verse 3: and all Jerusalem with him. Why would all of Jerusalem be troubled by the news that a king, perhaps the long-awaited Messiah, was born in Bethlehem of Judea as Isaiah foretold? One way to make sense of this is to think about how few Christians either think about and/or look forward to Christ's return in glory, however that might happen (i.e., cataclysm vs. continuity). This thought took me back to something I included in my homily for Midnight Mass: the Incarnation of the Son of God, the Second Person of the Most Holy Trinity "is so earth-shattering that it enacts something akin to the psychoanalytic concept of trauma" on the world.1

If his birth in the cave in Bethlehem had this effect, how much more "traumatic" will be his return "in glory," which will be his final and undeniable Epiphany? Try as we might, Christians can't escape eschatology nor should we want to. In other words, like "all Jerusalem" we, too, are often "greatly troubled" at the prospect of Christ' arrival. 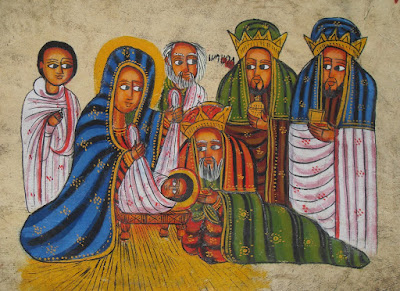 The Adoration by the Magi ... an Ethiopian artist’s impression (Photograph: Patrick Comerford)


Looking at this phrase more exegetically (if I may employ an awkward adverb), it is pretty certain that St. Matthew's Gospel was written in the midst of and for a Jewish Christian community (a Christian synagogue), albeit one that was beginning to receive more and more Gentiles. Receiving more Gentiles certainly makes the pericope that is our Gospel reading each year for Epiphany (i.e., Matt. 2:1-12) very important. It is important because it explains to the Jewish Christians of Matthew's communities how these Gentile converts fit into God's plan of salvation through Christ.

According to the Dominican New Testament scholar Benedict Viviano, the magi "were a caste of wise men, variously associated with interpretation of dreams, Zorastrianism, astrology, and magic."2 Later, the magi became kings and later still their number was fixed at 3, which is likely arrived by their three gifts. In the Western Church, Viviano noted, the three kings "were named: Caspar, Balthasar, and Melchior, and Caspar became black."3 The three magi turned into "representatives of the Gentile world in all its racial diversity..."4

It was Raymond Brown who noted that "all Jerusalem," along with Herod and including the scribes and the chief priests, being so troubled by the news of the birth of the "king of the Jews" that they sought to take Jesus's life are an anticipation of "Pilate, 'all the people,' the chief priests, and the elders of Matt's passion narrative."5 Brown made the key point: "In both instances God frustrates the plans of these hostile adversaries (through Jesus' return Egypt, and through the resurrection)."6

What's the point? I think it is something like being determined not be God's hostile adversary and to cooperate in ushering in God's reign. How do you cooperate with instead of oppose God? The answer to this is very clear in St. Matthew's Gospel: "You shall love the Lord, your God, with all your heart, with all your soul, and with all your mind. This is the greatest and the first commandment. The second is like it: You shall love your neighbor as yourself. The whole law and the prophets depend on these two commandments.7 Until his return, it is by loving our neighbor (our neighbor being anyone we encounter who needs our help) through selfless acts of service that we reveal Christ to the nations.