What you need is a change of heart

I am convinced that when it came to many of his encounters with the Pharisees that are written about in the Gospels, the crux of Jesus' teaching was often in response to those with whom he spoke mistaking means for ends. After all, one could keep the 613 so-called mitzvot, or "words," meaning rules (i.e., prescriptions and proscriptions- dos and donts) and still not be holy. At least from a Christian perspective, to be holy means nothing other than to love perfectly.

At St. Matthew records it, when queried by the Pharisees about which of the commandments is the greatest, Jesus replied:

From this it is easy to see that the basis of morality, of moral action, of living a moral life, is love. It bears noting as often as this passage and the one like it in Luke's Gospel, which is followed by the Parable of the Good Samaritan, is invoked that Jesus is doing nothing other than reciting the law back to those seeking to trip him up, namely Deuteronomy 6:5 and Leviticus 19:18 respectively. One can argue that a distinct feature of Jesus' teaching in Matthew is his teaching that it is upon these two commandments that the law and the prophets depend. This is why Christians call these "the two Great commandments." In the Parable of the Good Samaritan, as well as in Matthew's Sermon on the Mount, Jesus taught that the stranger is our neighbor, one's enemy is his neighbor, etc., and not only one's kinsman or fellow Israelite.

Like many of the Pharisees with whom Jesus interacted, some Catholics, become very hung up on rule-keeping, mistaking it for holiness and allowing one's imagined holiness to provide justification for judging the failure of others to be as observant. It's just this attitude Pope Francis has sought to challenge over the course of his nearly four year pontificate. In his straightforward way, the Holy Father has denounced this as pelagianism. In today's Gospel Jesus assures his listeners that he came to fulfill, not abolish, the law. He came to show what perfect observance of the law looks like in "real" life, which apparently bore little or no resemblance to what at least some Pharisees conceived when they considered observing the law of Moses. What the Lord demonstrated is that the law was given as a means to the end of loving God and neighbor perfectly and not some exercise in what might be called, perhaps a little anachronistically, Stoic virtuosity.

What Jesus showed us is that why we do what we do matters every bit as much, perhaps even more, as what we do. As his disciples, the reason for our thoughts, words, and deeds should be love. In short, we can do the right things for the wrong reasons. This is just what the Lord calls to our attention with his theses and antitheses: "You have heard that is was said to your ancestors, You shall not kill; and whoever kills will be liable to judgment"- thesis (Matt 5:21). He then says, "But I say to you whoever is angry with his brother will be liable to judgment"- antithesis. In his teaching on divorce Jesus' shows us that it is the result of a failure to love. What Jesus taught and demonstrated is that holiness, Christlikeness, is a question of your heart, not of adherence to rules externally imposed, which is legalism. With regard to the law and its fulfillment in Jesus, he accomplished in his own person what Israel could not accomplish over the course of its long history. 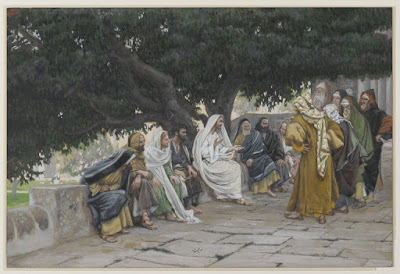 
With regard to the Lord's exhortation not to swear oaths, I think theologian Stanley Hauerwas summed it up best: "oaths are a sign that we live in a world of lies." This is why, as disciples of the One who is Truth personified, our "Yes" should mean Yes and our "No" mean No. If this were the case oaths would not be necessary.

Jesus' words about plucking out eyes and lopping off appendages are the rhetorical device of hyperbole - an exaggerated statement that is not meant to be taken literally. It is meant to demonstrate what happens when a person refuses to love. Sartre's line that "hell is other people" is often ripped out of context and misused. But the quote, in context, has a lot of relevance for today's Gospel reading. These words are taken from Sartre's one act play, which in English is entitled No Exit. He wrote the play in 1943.

No Exit is set in hell and begins with the arrival of three people in the inferno. As one might imagine, the characters try to determine what led them to hell and what punishment(s) they might be in for. Without too much delay, they come to realize that there is no one there to punish them; being put together is their punishment. Hence, the relevant quote is: "All those glances that I eat … Ha, you’re only two? I thought you were much more numerous. So that’s hell. … I never thought You remember: the sulphur, the stake, the grill. Oh, What a joke. No need to grill: hell is other people." With reference to Jesus' teaching, hell is the realm of people who refuse to be loved and to love. This confirms what most of us have experienced in one way or another: the absence of love creates hell on earth.

St. Paul, in our New Testament reading, taken from his First Letter the Corinthians, reinforces that life is about love: What eye has not seen, and ear has not heard, and what has not entered the human heart, what God has prepared for those who love him (1 Cor 2:9). Because it fundamentally means "listening to," genuine obedience requires love. Stated another way, without love there is no true obedience. What the Pharisees with whom Jesus interacted in this passage from St. Matthew's Gospel lacked was love. This is why Fr. Timothy Radcliffe insisted we have no business discussing morality with another person until that person knows God loves him/her.

What the Lord seeks to bring about in each one of us is repentance, metanoia, a change of heart. Love, not fear of punishment, is the force that enables our hearts to change.
at February 12, 2017