In a recent interview the newly elected Superior General of the Society of Jesus (Jesuits- the order to which Pope Francis belongs), Father Arturo Sosa Abascal, who hails from Venezuela, had the audacity to state the truth, not in its simplicity, which is frequently exaggerated because there are those who either don't want to engage or don't want others to engage largely due to fear, but in its irreducible complexity. He did this with regard to the currently much-debated and highly divisive topic of marriage. No doubt referring to Jesus' words as set forth in Mark 10:1-12 and Matthew 19:1-12, both of which sections are followed by the Lord pointing out the importance of children, Fr. Sosa said something that to my mind is non-controversial: that Jesus' words must be considered in their historical context, which includes factoring in the time and culture in which he lived, the intent and purpose, to the extent they can be determined, of the inspired evangelists who wrote the Gospels must also be considered, even compared to the original context of the Lord's teaching. This should not be controversial for Catholics in light of what is set forth in the Second Vatican Council's Dogmatic Constitution on Divine Revelation, Dei verbum:

To search out the intention of the sacred writers, attention should be given, among other things, to "literary forms." For truth is set forth and expressed differently in texts which are variously historical, prophetic, poetic, or of other forms of discourse. The interpreter must investigate what meaning the sacred writer intended to express and actually expressed in particular circumstances by using contemporary literary forms in accordance with the situation of his own time and culture. For the correct understanding of what the sacred author wanted to assert, due attention must be paid to the customary and characteristic styles of feeling, speaking and narrating which prevailed at the time of the sacred writer, and to the patterns men normally employed at that period in their everyday dealings with one another.

But, since Holy Scripture must be read and interpreted in the sacred spirit in which it was written, no less serious attention must be given to the content and unity of the whole of Scripture if the meaning of the sacred texts is to be correctly worked out. The living tradition of the whole Church must be taken into account along with the harmony which exists between elements of the faith. It is the task of exegetes to work according to these rules toward a better understanding and explanation of the meaning of Sacred Scripture, so that through preparatory study the judgment of the Church may mature. For all of what has been said about the way of interpreting Scripture is subject finally to the judgment of the Church, which carries out the divine commission and ministry of recording and interpreting the word of God (par. 12- emboldening and italicization added by me) 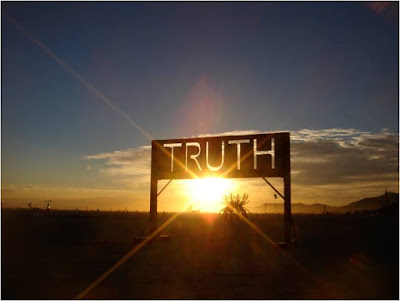 Fr. Sosa went further by insisting that "there would have to be a lot of reflection on what Jesus really said." In addition to grasping Jesus' words as recorded in the Gospels in the contexts of both his teaching and the composition of these sacred texts, the Superior General went on to say that in light of our contextual understanding of the Lord's words, we need to examine, not what Jesus said- the Gospels remain authoritative- but how we have interpreted his words. Again, Dei verbum teaches that before teaching God's word, the Church's teaching authority must first "devoutly" listen to it (par. 10).

Where the confusion comes for many people, I think, is in the relationship of truth to the knowing subject. Therefore, it is important to point out that it is very often that case that truth doesn't just hang there like a red coat so that a person, at least one who is not color blind, can clearly see there is a red coat. It's a bit more complex than that.

Merely pointing to authority is a fallacious move. Therefore, those who lament the passing of a time (if one ever existed) in which people simply accepted everything on authority are, in my view, misguided. During such times authority was usually authoritarian, which is what led its overthrow. Let's face it, freedom, which is not just the multiplication of choices, is scarier than it is comforting, as the question that arose when "doughboys" returned home from Europe at the end of World War I demonstrates: "How do you keep 'em down on the farm after they've seen the lights Paris?" The simple answer is, you can't. Furthermore, you shouldn't want to, at least those who do not wish to return to the farm, some, no doubt, desired to do so. In this regard, I point to Book V, Chapter 5 of Dostoevsky's masterwork The Brothers Karamatzov, which can and often is read as a stand alone text, but is better in the context of the novel: The Grand Inquisitor.

To state the obvious, truth without context can neither be apprehended nor comprehended. It may well be the case that if the context is misunderstood, or simply ignored, words can be and often are misinterpreted. After all, Jesus certainly did not go around uttering inscrutable propositions divorced from the situations he faced. His teaching is always contextual and concrete. If Scripture is the prime vehicle for revelation and, within the Sacred Scriptures, "the Gospels have a special preeminence" (Dei verbum, par 18), then grasping the context of the Lord's teaching is indispensable for understanding what he taught and living it, this includes his teaching on marriage. Because the word of God is inexhaustible, we can always, corporately and individually, arrive at a better, clearer understanding of what is conveyed to us in words.

In my view, truth without context only comprises so much ontological clutter. For Christians, merely repeating doctrinal propositions is self-defeating and no way to proclaim saving truth. This is where beauty comes into play. To matter, truth must resonate within a person, or to borrow Luigi Giussani's preferred term, truth must "correspond" to my need and my desire, scratch my itch, say something to me about my life.

How, then, do we communicate the liberation that only the truth can bring? We do so by living the truth joyfully, lovingly, and (GASP!) non-judgmentally. We must be the ones within whom the truth resonates so that we can radiate. From a theological perspective, faith aids reason, that is, helps us apprehend, comprehend, and appropriate the truth. Truth must e incarnated, another word for which is lived. Faith is a gift from God. While faith that merits the name includes one's response to God's gracious initiative, it is not a strictly voluntaristic endeavor. Simply stated, truth, while by no means exclusively subjective, has a subjective dimension. How else can truth set the captive free?
at February 25, 2017