"But there ain't no saint just for killers"

My favorite reason of all reasons that be given has long been for no particular reason. Therefore, I sometimes introduce things by saying or writing, "Apropos of nothing, ..." Our traditio for this Friday in mid-February is the polar opposite: Apropos of many things, if not everything, our song this week is the late, great Joe Strummer singing "Evil Darling," off the soundtrack of the 1987 movie Straight to Hell, in which he also starred. 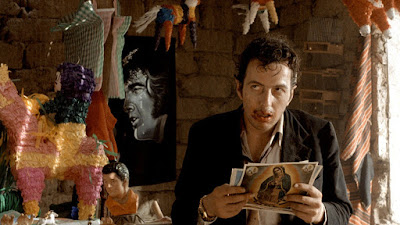 Straight to Hell is an independent film co-written and directed by Alex Cox. It was kind of a parody of Spaghetti Westerns. The movie is based on a criminal gang who, while stranded in the desert, stumble into a town populated by coffee-addicted killers. Straight to Hell was based on Django...If You Live, Shoot, a 1967 movie by Giulio Questi. Straight to Hell was re-mastered and re-released on DVD in 2010, complete with extended soundtrack.

And he knew how hard it was to cry
This evil darling, this deep blue sky
To be the rain in a dying man's eye
Cry for water and you get no reply
Beg for mercy and laughter fills the sky
at February 17, 2017

Email ThisBlogThis!Share to TwitterShare to FacebookShare to Pinterest
Labels: Communion and Liberation, Cultural, Reflections and Ruminations