The face of God

Jacob was called Israel because he spent an entire night wrestling with an angel, or, as most Scripture scholars would concede, wrestling with God. According to the footnote in my Bible, "Israel" means either "'one who strives with God' or 'God strives.'" I don't claim to be a Hebrew scholar, but I suggest that theologically it might make more sense (and at the same time less sense, thus giving us a true insight into the divine) to replace the "or" with an "and." Going back to the beginning of Israel (i.e., the night of Jacob's wrestling match), which was the night before Jacob was to meet his brother Esau after more than 20 years of being away. Understandably, Jacob was fearful of meeting Esau not only because he had extorted Esau's birth right in exchange for food when Esau was famished, but because he also usurped Esau's blessing from their father, Isaac, by deceiving their father at the behest of his mother Rebekah, making Isaac think that he was Esau.

In my view, the scene of Jacob and Esau meeting is one of the truly remarkable scenes found anywhere in Sacred Scripture. Esau went out to meet Jacob with 400 men, leading Jacob to believe that his older brother had come to exact revenge, to do him harm, perhaps even kill him. And so, believing revenge was Esau's motive, Jacob had an elaborate plan to split his large traveling party in two and to appease Esau by offering him a gift of many, many animals from his flocks. But upon seeing his younger brother, the very one who had so callously deprived him of his dignity as the older brother, Esau, much like the father in the Lord's parable of the Prodigal Son, "ran to meet him" (Gen 33:4). Upon encountering his wily younger brother, Esau "embraced him, and fell on his neck and kissed him" (Gen 33:4). Scripture tells us that as they embraced "they wept" (Gen 33:4).

After embracing and weeping together, Jacob introduced his family to his brother. Initially, Esau refused Jacob's generous offering to him, telling his younger brother that he had enough. He accepted the gift because Jacob insisted, saying, "No, please; if I find favor with you, then accept my present from my hand; for truly to see your face is like seeing the face of God - since you have received me with such favor" (Gen 33:10). 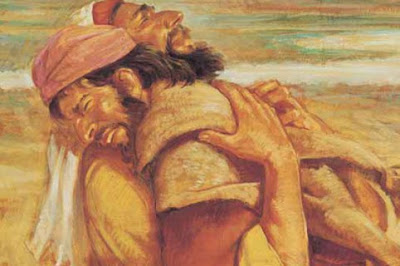 As I read it, we see the face of God when we are received with favor despite whatever we have done, the way Esau received Jacob despite what he had done against him. It has always struck me as a little odd that in this passage it is Esau, not the "patriarch" Jacob, who acts in so godly a manner. Being the sinner I am, it is always easier for me to identify with Jacob. But I am not going to let myself off that easily. How often could I act after the manner of Esau, graciously extending love to someone who has wronged me, even if, unlike Jacob, they don't make a magnanimous gesture either out of fear, which was clearly Jacob's motive, or genuine contrition? God stands always ready to welcome us the way Esau welcomed Jacob.

St. Paul wrote to the Ephesians: "Be kind to one another, tender-hearted, forgiving each other, just as God in Christ also has forgiven you" (Eph 4:32). I don't know about you, but I sometimes find the Christian community one of the least forgiving places. Maybe this is an extension of the oddity of Esau being the godly person and Jacob being the deceptive person. This would explain a lot of theological contretemps. In this regard, it is somewhat understandable that the Church consists of a lot of people like me, Jacobs, rather than Esaus. But being Jacobs, as Paul intimates, should make us more like Esau. My question is- Does it?

Looking ahead in Genesis, it is easy to see that in his son Joseph, who behaves towards his less-than-deserving brothers after the manner of his uncle, Esau, lies Jacob's vindication. At least in my view, Jacob is one of least sympathetic figures in Scripture, which is perhaps why it is so easy for me to identify with him.
at March 11, 2016