Holy Week: a chance for some to major in the minors

One of things I dislike about Holy Week on social media is how eager some Catholics are to major in the minors when it comes to liturgy. Because a lot of this occurs on-line, it strikes me as fairly passive-aggressive. The palms distributed on Palm Sunday and Holy Thursday's Mandatum Rite are always a particular focus for those spoiling for a liturgical fight. As with most negativity, these complaints, once they start, almost always spill over into the predictable complaints: holding hands during the Our Father, communion in the hand, exchanging hugs, handshakes, and gestures of peace during the sign of peace (Gasp! Imagine wanting to say to the person sitting in front of you two people to the left, "Peace be with you." Oh, the horror! What is the church coming to?), the assembly making certain gestures, and on and on. 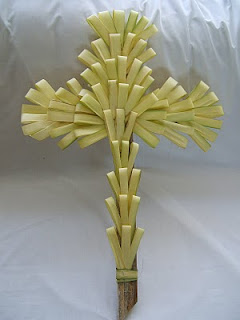 I actually like seeing the many beautiful things into which people weave their palm branches. It's amazing to me because I am so utterly unskilled at those kinds of things. As for the Mandatum Rite, I posted something rather lengthy after the formal change was made earlier this year, at the request of Pope Francis, by the Congregation for Divine Worship and the Discipline of the Sacraments permitting women to have their feet washed during the rite (see "On the overdue rubrical change to the Mandatum Rite"). This change permits, but does not mandate, the priest-celebrant to wash the feet of women. In fact, a priest is not required to celebrate the rite at all. In all honesty, based on a then-NCCB (the national conference of Catholic bishops is now known as the USCCB) document from the late 1980s, in many places in the U.S., perhaps even most, the feet of women have long since been washed on Holy Thursday.

Here's some news, good news some might say - You're not obligated to hold anyone's hand, or to receive communion in the hand, or make the reciprocating gesture when responding to "The Lord be with you," that is, while saying, "And with your spirit," or to say to even one person, "Peace be with you." Keep in mind, apart from standing, there is no prescribed posture for the assembly while praying the Our Father, no rubric that directs the assembly what to do or not do. Holding hands, in many places, has become a local custom, which is not binding, but is normative for that parish or congregation. I am sure there are other regions, countries, dioceses, and particular assemblies in which not holding hands is the norm. It is certainly true that holding hands while praying the Our Father is a post-Vatican Council II innovation, but it is not forbidden or really contrary to anything other than a subjective judgment, even if that judgment is well-informed. But keep in mind, what might be called "liturgical accretions" had crept to the Roman missal in the centuries following the Council of Trent. What is true of holding hands while praying the Our Father together, also goes for what I called "the reciprocating gesture." I understand that the argument from silence (i.e., nothing is stipulated about these matters) has it weaknesses, but I can't quite grasp why there needs to be a constant fuss about things that are not forbidden and don't violate or contradict an actual rubric or other authentic liturgical law. In order to be truly traditional, tradition must have a certain dynamic. 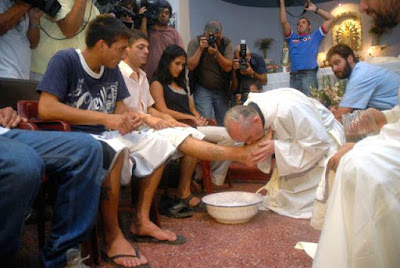 As a deacon, I try do things the way I am supposed to do them, which, among other things, means not making gestures reserved to the presider, like the 'orans' position or making the sweeping gesture when I say, before reading the Gospel, "The Lord be with you." But it doesn't cause me to go into hysterics when I see a brother deacon do those things.

To wit: how we do liturgy certainly matters, but everything in the liturgy is not of equal importance, not by a long shot. Some things must be done in a certain way, certain things are not to be done, other things may or may not be done. Above all, the liturgy should not produce rank polemics and division either on-line in the "cyberworld" or in the actual world. Because it is the Eucharist who makes us who we are collectively (i.e., it makes us the Church) and individually (i.e., Christians who belong to Christ because we belong to the Church), the liturgy is about Jesus and we, not Jesus and me.
at March 20, 2016

Email ThisBlogThis!Share to TwitterShare to FacebookShare to Pinterest
Labels: Liturgy, Reflections and Ruminations