Most of the time when Protestants, usually of the Evangelical variety, talk about rejecting religion in favor of a personal relationship with Christ, Roman Catholics have no idea what they are talking about. In the first instance, the confusion stems from the fact that "religion" is a complex term, it is equivocal instead of univocal. A univocal word is a word that possesses only one, fixed meaning. By contrast, an equivocal word has a variety of meanings. Without a doubt the word "religion" is equivocal.

It's important to act in good faith by granting the person seeking to draw a contrast between religion and relationship the benefit of the doubt. One does so by understanding that, at root, a person who speaks of rejecting religion in favor of a personal relationship with Christ is talking about rejecting empty ritualism and having things imposed on them from without. In other words, they emphasize experience, which is always personal, and inner conversion. Insofar as that is what such a person means, I agree with them, but not only does that not make me a Protestant - though I make no bones about identifying as an Evangelical in the healthiest and fullest sense of that term- it makes me very Catholic. It makes me Catholic because it enables me embrace the both/and. In my experience, it is often the case that the healthy impulse often becomes exaggerated and leads to a false dilemma- either religion or relationship, which dilemma leads to privatizing Christian faith.

What makes the exaggerated pitting of religion against relationship a false dilemma is that it not only leads to a faulty and deficient ecclesiology, but to a non-existent ecclesiology. This lack of an identifiable ecclesiology arises from a mono-Christic theology, which replaces a full-blown Trinitarian theology. After all, God, who is Father, Son, and Spirit, is a communion of divine persons. The Church, at least in its essential and ultimate form is the communio sanctorum (i.e., the communion of holy people and things). The false dilemma between religion and relationship turns God and we into Jesus and me. 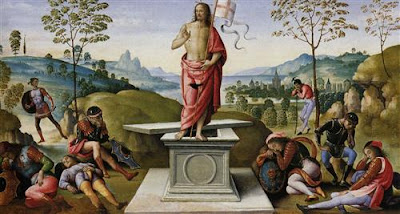 Resurrection, by Pietro Perugino, 1496, part of the artist's Polyptych of St. Peter


Recently I've been reading and re-reading Luigi Giussani's At the Origin of the Christian Claim. Today, backing up once again to the beginning of the book, I re-read a blurb that appears on the very first page of the English-language paperback edition. No author is identified for this abstract of the work. It was reading this that prompted me to write what I wrote above. It states that in his book,


Giussani argues that if we accept the hypothesis that the mystery entered the realm of human experience and spoke in human terms, the relationship between the individual and God is no longer based on a moral, imaginative, or aesthetic human effort but instead on coming upon an event in one's life. Thus the religious method is overturned by Christ: in Christianity it is no longer the person who seeks to know the mystery but the mystery that makes himself known by entering history (i)

I think this expresses what is at the root of making the distinction between religion and relationship before the exaggeration occurs. This brief summary also leads to a robust ecclesiology, especially when we consider the Christian event did not last for only 30+ years more than 2,000 years ago, but is on-going.

Whether people realize it or not, whether they like it or not, it is just what Giussani highlights here that Pope Francis is trying foster. Let's call it Christian maturity.
at March 27, 2016