The luxury of an eventless life

Today, the first day of Advent, I discovered someone new quite unexpectedly. I made my discovery browsing the blog of Darton, Longman, and Todd. The name of the person whose writing I discovered is Christian Bobin (see 'Get Moving, Jonah, I'm Waiting'). At the bottom of this post, which features an excerpt from a recently translated anthology of Bobin's writings, The Eighth Day, I found a link: www.christianbobin.com. When you go to the link there is a single selection: ENTER. Upon entering you are immediately connected to the page "About Christian Bobin."

Recently my wife and I have been watching the Welsh television program "Stella." The show takes place in the fictional Welsh town of Pontyberry, located in the not fictional Welsh valleys. At least to me, the show is about the power and importance of place. Some people are rootless, others very rooted. I fall someuwhere in between, but definitely lean far more towards being rooted. Rootedness is what I found when reading about Christian Bobin: 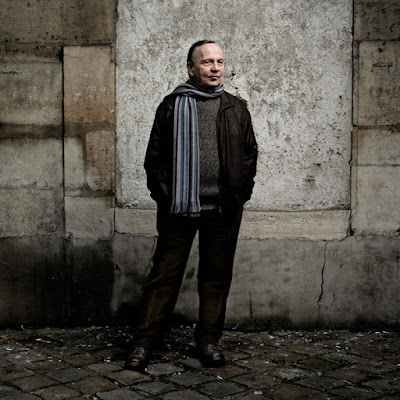 Christian Bobin was born in 1951 in Le Creusot, a town in Burgundy with a long industrial history, and has spent his life there or in its deeply rural surroundings. He studied philosophy at Dijon, was employed variously at the public library in Autun, the industrial heritage museum at Le Creusot, and as a student psychiatric nurse. He began writing in his twenties and soon found a committed public, which has allowed him the luxury of an eventless life in a land ‘whose borders are defended by boredom; whose speech is “a language without desire”, whose time is a stopped clock, where the self waits without waiting, like “a hive emptied of its bees”'

It is also noted on this page that Bobin's books sell in France "in quietly astonishing numbers."

In my heart of hearts, for as long as I can remember, I have longed for the luxury of an eventless life along the lines of what is described on Bobin's "About" page. But somehow events keep catching me. I suppose my purpose this Advent, then, is to wait until it no longer seems like waiting.

Doesn't waiting constitute most of history and most of our lives? Let's be honest, doesn't it sometimes seem like we're waiting for Godot, or who knows what? But reading this short blurb about Christian Bobin made me nostalgic. Without a doubt I shall read Eighth Day.

A short excerpt from the excerpt, which is about Jonah, two ten year-old girls walking in the wind in a modern wasteland, and the forces that laid the land waste:

While he’s in the whale Jonah sings, there’s nothing to do except sing in the dark, the cavernous belly of the dark, in the end he says right, you win, I give in, I’ll go there, I’ll tell these people of your anger and their doom

Email ThisBlogThis!Share to TwitterShare to FacebookShare to Pinterest
Labels: I believe, Notes and asides, scripture