Sketching the antinomy of the anatomies of heaven and hell

In my post "Metaphysical dialectics vs Sophiology" I linked to something I posted nearly six years ago on Catherine Breiallt's film Anatomie de l’enfer (i.e., "The Anatomy of Hell"), a movie based on her novel Pornocratie: "Opposing God to nature: the denial of the ontologically obvious."

Today as I organized my den I uncovered the composition notebook I was using back in 2009, one in which I took notes on Breiallt's film. Anatomie de l’enfer is a very sexually explicit movie. The male star, in fact, is none other than controversial pornographic actor and director Rocco Siffredi. Because of this I don't necessarily recommend the movie. Due to the nature of the film I give fair warning here that what follows in this post is not for everyone. It is rather more prosaic "take" on what I took up in my "sophiological" post on Saturday:


The woman, taking an unused tampon from the box, say, referring to her "period" - "We make such a big deal of it." Then, referring to the tampon, she says, "See the space it takes up and one can't even feel it?" The same space as most human penises. Proof that intercourse the act isn't what matters, but its meaning."

My question in response to this was, "Don't act and meaning go together? Can they be separated? We tend to focus on act w/out meaning, but where there is no act there cannot even be the possibility of meaning."

Taking the wrapping off the tampon, she says, "Look. There's a whole device to make it look complex. So one can insert it without touching one's self, keeping one's virginity intact without exploring one's genitals while inserting the tampon." She goes on to describe it as being like giving herself an injection, "As if to staunch a wound that is painful and highly sensitive."

Here's what I wrote: "Pain of childbearing, a wound a alienation between woman and man?- She says the whole operation is laughable [Chesterton made a similar observation- he was wrong, as is "Woman" in Breiallt's film- sex is beautiful. I'll stick with Wojtyla's Theology of the Body, which has been badly exploited by some Catholics to point of being almost unrecognizable], but she can't laugh because "it foretells of something terrifying that lurks in the brain of whoever designed and put his servile signature on this infamous thing. A man for sure."

Reflecting on all of this again six years later in the aftermath of reading Lewis' Perelandra, I see even more clearly that the line between awful and awesome, the line between exhilarating and terrifying, is quite thin. 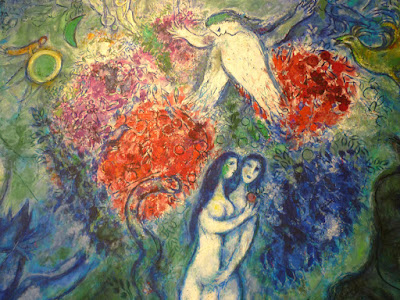 The Garden of Eden, by Marc Chagall


God qua God is not a man: "God transcends the human distinction between the sexes. He is neither man nor woman: he is God. He also transcends human fatherhood and motherhood, although he is their origin and standard: no one is father as God is Father" (Catechism of the Catholic Church, par 239). Just as we know that God is a tri-unity of persons only because God has revealed this to us, so we know that God, while being the source of femininity and masculinity, transcends both gender and sex:

Because we're creatures it is impossible for us to transcend either gender or sex. Our attempts to do so flow from the original sin, which is to displace God and put either ourselves, or our idols, which are nothing but our distorted self-projections, in God's place. In attempting such a transcendence we not only reject our creaturliness, but our very selves. Self-alienation is perhaps the most pernicious effect of the primordial sin.

Too often we misread the story of the fall and see the alienation, the breaking of communion between God and humanity, between human beings, and between humanity and nature, as not only being the woman's fault, but as having something to do with sexual temptation. Contra Springsteen, Eve did not tempt Adam "with her pink Cadillac." If we allow the Creation narratives to maintain their integrity we see that there was sex in the garden before the fall. While I hesitate to write posts like this one, it is well beyond time that we put sound theology into dialogue with contemporary culture precisely through culture to set forth an anatomy of heaven.
at October 12, 2015