My verse for today

This morning, as I was ending my prayer and reflection time, I picked up off the floor my copy of Pope St John Paul II's book Memory and Identity. I read the chapter "Europe As 'Native Land.'" I removed the book from the shelf the last time I was preparing to preach, but I did wind up using the quote I looked up. Reading this chapter, however, was a nice complement to finishing Havel: A Life.

Digressing from his analysis "of the European spirit," the Pope referred to Jesus' allegory of the vine and the branches, found in St John's Gospel, the fifteenth chapter. He quoted these words of Jesus: "I am the vine and you are the branches" (v. 5). With this, the saintly pope insisted, the Lord "develops this great metaphor, sketching as it were a theology of Incarnation and Redemption. He is the vine, the Father is the vine grower, and individual Christians are the branches"(98). He went on to say that Christ was incarnate so that the Father, by the power of the Spirit, could graft humanity "onto the stock of the divinity of his only-begotten Son" (98). From the beginning, Papa Wojtyla observed, our humanity, originally created in both God's image and likeness, was made for this. Further, "it is only by agreeing to be grafted onto Christ's divine Vine that man can become fully himself" (99). 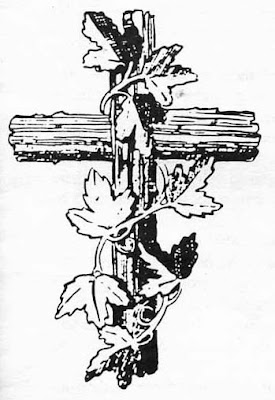 After briefly laying out the allegory of the vine and the branches, John Paul II asked, "Why, at this point in our reflections on Europe, do I speak of the vine and the branches?" He did so because he thought it offered "the best explanation of the drama of the European Enlightenment" (99). By rejecting the Lord, or marginalizing "his place in human history and culture," a "revolution" occurred in European thought (99). This revolution severed man from the vine, which vine "guarantees him the possibility of attaining the fullness of his humanity" (99). Further, this severing opened up a path "that would lead toward the devastating experiences of evil" that followed (99). While not in such an explicitly Christian way, Havel too, insisted on the necessity of attending to humanity's transcendent dimension, even going so far as to recognize the Christian foundation of Europe.

Later in the morning, praying with my wife and using Sarah Young's devotional Jesus Calling, I encountered the same passage, even the same verse (John 15:5). This second encounter with the same passage in the same morning grounded it some, said something to me about my life, especially about my need to surrender daily to Christ the Lord: "True confidence comes from knowing you are complete in My presence" (313).

Maybe it's because we're in the midst of fall that I was so attentive to this Scripture today, attuned to the image of vines, branches, and leafs.

A leaf drops from a branch dead, there to decay on the ground, or be raked up, sucked up, or mowed up. Chaplain Mike passed along the poem Autumn Song, by Dante Gabriel Rossetti:

And how the swift beat of the brain
Falters because it is in vain,
In Autumn at the fall of the leaf
Knowest thou not? and how the chief
Of joys seems—not to suffer pain?