The Cathedral of the Madeleine: Farewell, but not goodbye

I began serving at The Cathedral of the Madeleine years before I was ordained. After a year or so of working for the Diocese of Salt Lake City full-time, I was hired by then-Cathedral Rector, Msgr M. Francis Mannion, who oversaw the magnificent restoration and renovation of the Cathedral, completed in 1993, to serve as Director of Religious Education and Formation in 1995, replacing the irreplaceable Dr (Deacon) Owen Cummings. I served in that job for a year, but, even after moving on career-wise, I continued to serve in RCIA and as the Cathedral's main Master of Ceremonies (MC).

My first time serving in any liturgy was during the first-ever Society for Catholic Liturgy Conference, which the Cathedral hosted because Msgr Mannion was founder and president of SCL. I broke into liturgical service when I served as acolyte for sung Vespers presided at by Fr Chrysogonus Waddell, OSCO, a well-known Cistercian composer of liturgical music and liturgical scholar. My most vivid memory of that nerve-wracking service is when I spilled iradescent blue incense down the front of my white server's robe just before coming out with the thurible and boat for the first time.

It was at this same conference that I also had the great pleasure of meeting both Fr Aidan Nichols, OP and Eamon Duffy, the Cambridge Church historian and author of The Stripping of the Altars, which, while then several years published, was still making a splash.

I can say in all honesty that were it not for Msgr Mannion's encouragement and urging, I would never have become a deacon. Even though Msgr Mannion left the Cathedral in 1999 to become the founding Director of the Liturgical Institute at Mundelein Seminary, named to that post by Francis Cardinal George, OMI, I continued to serve at the Cathedral teaching Adult Formation, including RCIA, and serving as the main MC during my diaconal formation, which I received from 2000-2004. Along with my classmates, I was ordained on 24 January 2004 by then-Bishop George Niederauer in The Cathedral of the Madeleine. Bishop Niederauer then assigned me to the Cathedral.

I have performed the whole of my diaconal ministry to this point (11+ years) at the Cathedral. I can say, without any reservation, that, apart from being my wife's husband and father of my 6 children, serving at The Cathedral of the Madeleine has been the greatest honor in my life. I have served under three rectors, Msgr Mannion, Msgr Joseph M. Mayo, without whose financial help I could not have completed my graduate degree, and for the past roughly year and-a-half, Fr Martin Diaz, the current Rector. All three of these men are wonderful priests and pastors, who have taken great care of me not only as a deacon, but as a Christian placed in their charge. 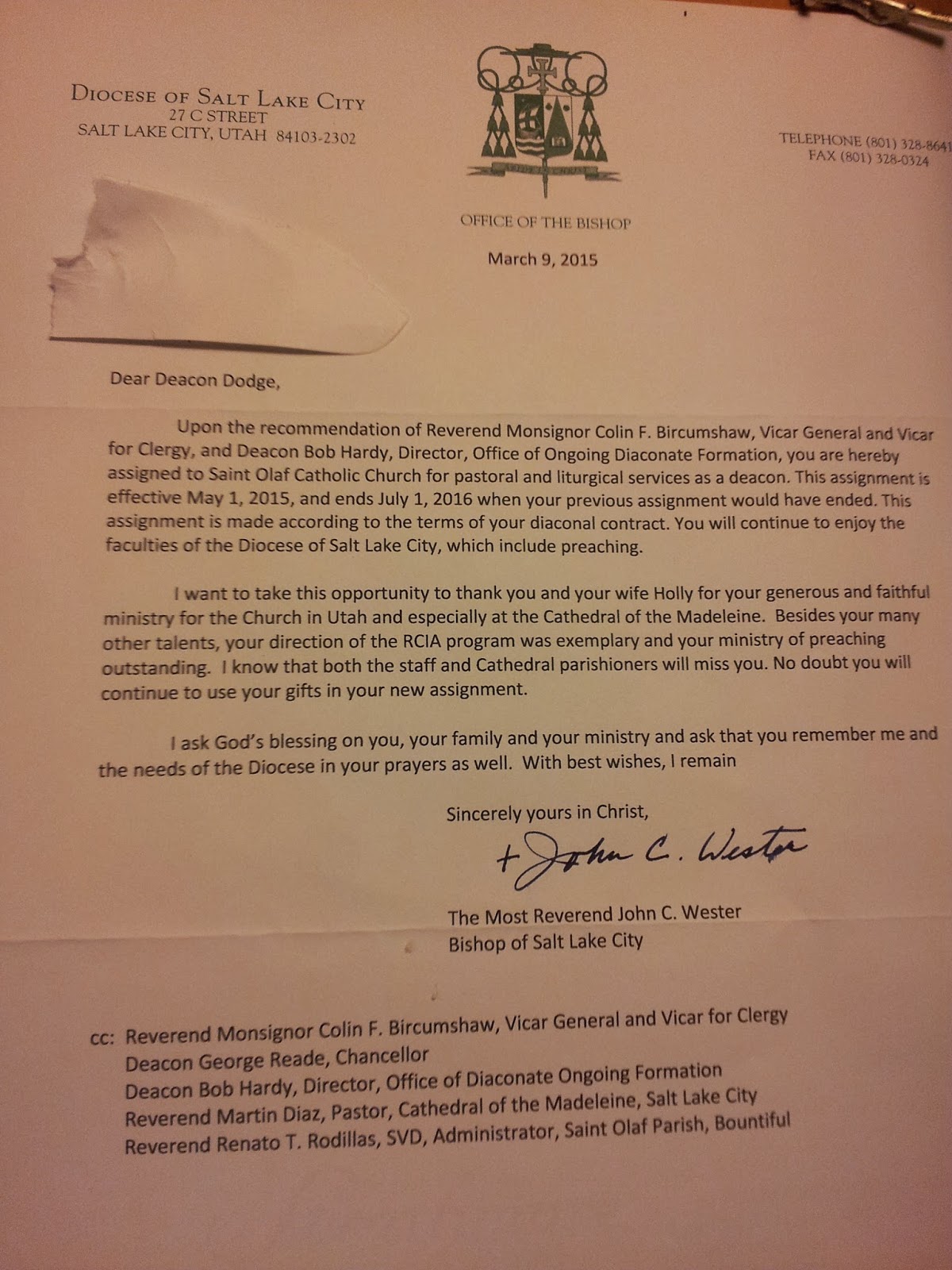 As you've probably already guessed, all of this is a lead up to the announcement that I am leaving The Cathedral of the Madeleine. Today, in the mail, I received a letter from my bishop making my requested transfer official. Beginning 1 May 2015 I am assigned as a deacon to St Olaf's Parish in Bountiful, Utah.

I must note, in addition to having served at the Cathedral under three wonderful rectors, I have also had the privilege of serving there under two amazing bishops: George Niederauer and now John Wester. Bishop Wester has truly been a pastor to me and to my family. One of our great thrills and cherished family moments was when he baptized our youngest son, Evan. In my estimation, there are few things a deacon can do that are more meaningful than assisting his bishop in the celebration of the Holy Mass in the bishop's Cathedral. I have had that privilege innumerable times. I certainly hope I have not done so for the last time!

When I first began serving at The Cathedral of the Madeleine, we lived in Salt Lake City. We continued living there for a few years after I was ordained. In the summer of 2006, we moved north of the city, to a town called Bountiful. We currently live only about a mile away from our local parish, St Olaf's, where my lovely wife and children attend Mass and are involved in music and other liturgical ministry, as well as in children's catechesis, both as recipients and as catechists. After thinking, praying, and discussing a possible move since Easter 2014, it became evident between last Christmas and New Year, that the Lord was calling me to make a move. Many things have verified the rightness of this very difficult, even somewhat excruciating, decision. At the end of January, I began the process of asking for a transfer. While it became official on 9 March, it has been a done deal, so to speak, for several weeks.

Above all, the greatest privilege of my service at the Cathedral has been serving all of the wonderful people over the years. Serving at a downtown, urban parish has been nothing short of amazing at times, and heartbreaking at others. The greatest aspect of my new assignment will be serving and serving with people here in the community in which I live.
at March 13, 2015