Random thoughts for a Wednesday afternoon

I haven't done a wide open and rambling post for quite sometime. In the past I have resorted to posting this, usually on Saturday mornings, because it is the only way for me to come even close to capturing, if only in a very incomplete way, what happens to me. Last night I was very struck by Pope Benedict's opening remarks to bishops gathered in synod in Rome to discuss the vexing problem of the ancient Christian communities of Middle East. I have had many personal experiences with these communities, which have always deeply moved me. My faith is so weak compared to that of my sisters and brothers whose adherence to Christ places them in danger daily. I cannot believe for one moment that when the apostles said to Jesus "increase our faith," they knew what they asked.

I was particularly struck by the Holy Father's reference to "anonymous capital", that is, to the world's impersonal and depersonalizing way of doing business. I have to admit that by reading the Pontiff's remarks I felt very vindicated with my on-going critique of Goldman-Sachs, which, to me, exemplifies what Benedict was referring to when he spoke about "the anonymous capital that enslaves man, which is no longer in man’s possession, but is an anonymous power served by men, by which men are tormented and even killed. It is a destructive power, that threatens the world." These words, at least to my mind, are very prophetic.

I was also profoundly moved and gratified, not to mention privileged, to participate in the KUED discussion this morning, which seeks to bring some local flavor to the PBS event God in America. One thing that all of us who participated share is the belief in the transcendent dimension of human being, what Don Giussani so aptly termed the religious sense, which is nothing other than the recognition, at the level of personal consciousness, that existence, my existence, has meaning and purpose. So, the Second Vatican Council and Pope John Paul II were absolutely correct to assert that the most fundamental human right is freedom of conscience with regard to matters of faith (i.e., religious freedom). The only human right more fundamental than the freedom to worship God according one's own conscience is the right to life, without which all other rights have no meaning. 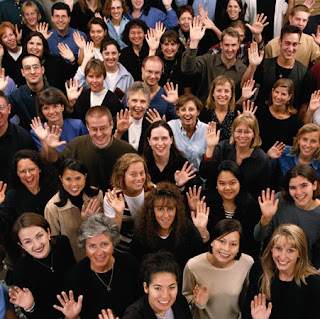 Beyond just a common belief in the transcendent dimension of human being, we all share a belief that we are lovingly created in the image of God and that recognizing what Catholics call the imago dei in every person is the basis for morality and right action. After all, loving God with one's whole being and loving one's neighbor as one's self are taken directly from the Torah.

What the Catholic tradition brings to religion in America, which often tends to be very individualistic, is that faith and reason work together to bring us to the fullness of truth, to give us access to what we can really call knowledge. When the split between believing and knowing occurs it throws us off balance, puts us out of kilter. When reason is in the ascendant, we tend to become somewhat authoritarian. When faith holds the upper hand, we tend to be very individualistic and subjective, thus rendering faith as something that is merely private. This is why religious communities are so important, which is just a way of saying we need each other, we need connection.

It is never objectivity vs. subjectivity, but how do I engage reality according to the totality of its factors? As a Catholic the sacramental dimension, especially the Eucharist, around which everything else revolves, like the solar system orbits around the sun, is what connects me to God (in Christ by the power of the Spirit), to others, and to the world, showing me just why I am made, why what I do matters, not to mention why I am in church and not home watching football, or hiking, or sleeping, reading the newspaper, etc. In short, church is not where I have to be, but where I want to be because it is what allows me to be.