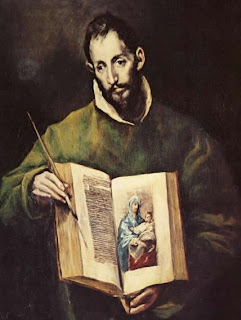 St. Luke, by El Greco
"Inasmuch as many have undertaken to compile a narrative of the things that have been accomplished among us, just as those who from the beginning were eyewitnesses and ministers of the word have delivered them to us, it seemed good to me also, having followed all things closely for some time past, to write an orderly account for you, most excellent Theophilus, that you may have certainty concerning the things you have been taught" (Luke 1:1-4- ESV).

October is, indeed, a month during which we celebrate and commemorate many great saints. Had yesterday not been Sunday, we would have observed the memorial of St. Ignatius of Antioch, who is the baptismal patron of a certain little guy who celebrated his second birthday yesterday. There is a connection between Ignatius and Luke: both are from Syrian Antioch.

Of course St. Ignatius was a martyr, who like St. Paul, was led to Rome in captivity, where he was fed to wild beasts. As he made his way to Rome, he wrote letters to the churches in Asia Minor. After his martyrdom, his relics were brought back to Antioch by Deacon Philo of Cilicia and another faithful brother, Rheus Agathopus. Once back, his remains were interred outside of Antioch. Later, his relics were moved and re-interred by Emperor Theodosius II in what was formerly a Temple of Fortune, but was converted into a church under his patronage. Finally, in AD 637, the relics of this great bishop/martyr were translated to Rome, where they remain today in the church of St. Clement, which was built on the site of what had been a Temple to Mithras. St. Ignatius of Antioch, fearless martyr, who shows us what victory without power looks like, pray for us. 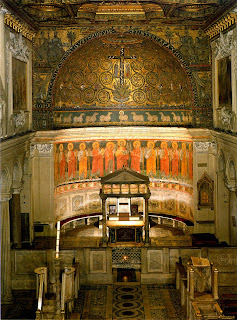 Main altar of the Church of St. Clement, beneath which St. Ignatius' relics, along with those of St. Clement, are interred
Veni Sancte Spiritus, Veni per Mariam
at October 18, 2010