One of the aspects of Catholic social teaching that is often ignored or disregarded is what the church teaches with regard to work and labor. Each year the United States Conference of Catholic Bishops issues a Labor Day statement. I come from very working class people. I am always amazed when people point to all the great historical figures to whom they are related. I am related to no such people, certainly not the famous Dodge brothers nor to Grenville Dodge, the Civil War general and driving force behind much railroad building. In fact, I do not think any of my grandparents, all of whom lived their entire lives in the 20th century, graduated from high school. My parents and all their siblings have high school educations, but it was not until my generation that members on both sides of my extended family went to college, even then not all of us by a long shot, let alone to graduate school. Telling my Dad I was majoring in Philosophy and History was a very difficult moment for me, not to mention for him. He is still surprised that I manage to make a living. 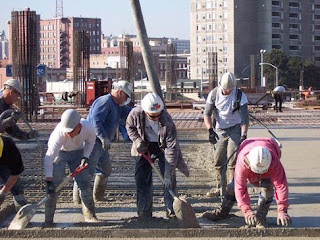 Despite that, everyone has been alright because of their willingness to work hard. My Dad worked for quite a few years assembling dishwashers. We did not even own a dishwasher until many years after he stopped doing that job. To make ends meet, he worked as a barber on Saturdays, having attended vocational school after he mustered out of the Navy. It was while he was attending barber school at the old Utah Technical College that he watched the news of President Kennedy's assassination while having lunch at Bill & Nada's. Over the years of our growing up, he did a lot of odd jobs on weekends and in the evenings. Even though he is retired now, he won't let me pay for lunch, supper, or even a cup of coffee.

As one might expect, this year's USCCB Labor Day message, The Value of Work; The Dignity of the Human Person, draws heavily on the Holy Father's encyclical, Caritatis in Veritate:

"As we seek to rebuild our economy, produce a better health care system, and improve the immigration system, we are presented with unique opportunities to advance the common good. Pope Benedict’s new encyclical insists that the ethical dimensions of economic life begin with protecting the life and dignity of all, respect for work and the rights of workers, and a genuine commitment to the common good. As the Holy Father points out: 'it is a good that is sought not for its own sake, but for the people who belong to the social community and who can only really and effectively pursue their good within it. To desire the common good and strive towards it is a requirement of justice and charity' (emphasis in the original, #7).

"On this Labor Day, let us remember those without work and without hope. Too often in our public discourse anger trumps wisdom, myth outweighs fact, and slogans replace solutions. We can work together and rebuild our economy on the moral principles and ethical values outlined by Pope Benedict in his new encyclical. This Labor Day, we should take a moment to pray for all workers and all those without work. We should also ask God’s help in living out the Church’s call to defend human life and dignity, to protect workers and their rights, and to stand with the poor and vulnerable in difficult economic times. In his new encyclical, Pope Benedict challenges and reassures us: 'As we contemplate the vast amount of work to be done, we are sustained by our faith that God is present alongside those who come together in his name to work for justice' (#78)."

Let's not forget everything that has happened this past year. Let's also understand in a deeper way that society requires solidarity and makes us interdependent. We all have a responsibility to towards each other. After all, wasn't it Cain who asked whether he was his brother's keeper?
at September 05, 2009