A note from our retreat

Our annual deacon retreat was a great experience. Rarely do we get the opportunity to spend time together as a deacon community because we are all so busy. We only have two opportunities per year: our retreat and our lecture and dinner just before the Chrism Mass. We had a really outstanding retreat master, Dr. William Shaules, who teaches Scripture at Loyola Marymount University in Los Angeles and at Fuller Theological Seminary, an evangelical Protestant school also located in the greater L.A. area. He is very involved with the diaconate formation program in the Archdiocese of Los Angeles. We looked at The Gospel According to St. John. I have 12 pages of notes!

Of everything Dr. Shaules guided us through, I was most impacted by our discussion of the story about the Samaritan woman Jesus encounters at the well in the fourth chapter of John. I agree very much that to see and define her as "the woman living in adultery" because she had been married five times and was living with a man who was not her husband is really to miss the point entirely (John 4:17-18). Given the highly literary manner in which the fourth Gospel was composed, defining her this way is nothing less than a deviation from the text. 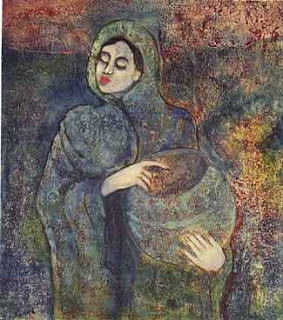 The whole Samaritan interlude in this Gospel is indicative that the Johannine community had a significant Samaritan contingent. The five husbands may well be a literary device that refers to the five nationalities we find in 2 Kings 17:13-34 where we read about the Assyrian destruction of the northern 10 tribes, whose elites were forcibly relocated, while people from "Babylon, Cuthah, Avva, Hamath, and Sepharvaim" were forcibly resettled in Samaria. This is the historical background of the split and subsequent animosity between Samaritans, who are a racially mixed nation, and Jews. This split is very much present in the dialogue at the well, during which Jesus talks about worshipping in Jerusalem, site of the Temple on Mt. Zion, or on Mt. Gerazim, the place the Samaritans viewed as sacred. In addition to stating that "salvation is from the Jews," the Lord refers to the time when people will worship neither in Jerusalem nor on Mt. Gerazim; when "true worshipers will worship the Father in Spirit and truth" (John 4:22-23). Because of Jesus, these true worshippers will be from all nations and can worship the Father anywhere and everywhere.

There two more accurate ways of defining the Samaritan woman; as theologian and apostle. Both of these can be summed up by one word: witness. She is a witness to the event that became for her an encounter. An encounter that happened when she went to draw water from the well, a mundane and every day chore, and received the living water, Jesus, the water that quenched the thirst of her desire to be happy, fulfilled, satisfied. Like this woman, our desire is bigger than the world, even infinite. Hence, our fulfillment must be infinite, too. Like the Samaritan woman, we long for the water that quenches our thirst, for the life that is truly life.

Email ThisBlogThis!Share to TwitterShare to FacebookShare to Pinterest
Labels: scripture