Nearly fifty years ago, theologian Karl Rahner observed: “The devout Christian of the future will either be a ‘mystic,’ one who has experienced ‘something,’ or he will cease to be anything at all” (Karl Rahner, “Christian Living Formerly and Today,” in Theological Investigations VII, trans. David Bourke, New York: Herder and Herder, 1971, 15, as quoted by Mary Steinmetz in her article “Thoughts on the Experience of God in the Theology of Karl Rahner: Gifts and Implications,” 1). From a Christian perspective, a mystic, at least for Rahner, as well as in the Church’s tradition, is not someone with her head in the clouds all the time, who lives a life disconnected from the world, its people and their concerns. A mystic is a person in whom God’s transcendence and God’s immanence intersect. Because it flows from the sacraments, especially the Eucharist, Christian spirituality is always incarnational. For the genuine mystic, love of neighbor is the result of experiencing divine love.

Mysticism is the fruit of contemplation. Contemplation, in turn, is the root of Christian action. Thomas Merton put this simply: “Action is the stream and contemplation is the spring” (No Man Is an Island, 73- First Shambala Library edition).

In light of our first reading, we may well ask, “What does it mean to be a prophet?” As Moses’s response indicates, a prophet is a person filled with the Spirit. As we learn elsewhere in Scripture, like the wind, the Spirit “blows where it wills” (John 3:8). As a result, while the Church, being the sacrament of salvation in and for the world (Lumen Gentium, sec. 48), remains indispensable (albeit not in the way we are inclined to think it so), no group or person has a monopoly on God. As the Second Vatican Council’s Pastoral Constitution on the Church in the Modern World stated:

since Christ died for all [people], and since the ultimate vocation of [every human being] is in fact one, and divine, we ought to believe that the Holy Spirit in a manner known only to God offers to every[one] the possibility of being associated with this paschal mystery (Gaudium et Spes, sec. 22)

If there’s one thing we should learn from Jesus’s life and ministry it is that God is made manifest to us in the most unpredictable ways. Because God is always at work in the world in the most unexpected people and situations, overcoming the idolatry to which we are all naturally quite prone, means recognizing that we can’t manufacture an encounter with the Mystery. Finding God, as it were, is very often counter-intuitive. The most profound proof of this assertion is that the Son of God, Jesus, whom we revere as the Christ, became one of us, not as the emperor Rome, but as a marginal member of a marginal people. From a worldly perspective, Jesus was born a nobody.

In the Synoptic Gospels (i.e., Matthew, Mark, and Luke), Jesus and the Twelve journey to Jerusalem from their native Galilee only once. We are currently reading from the section of St. Mark’s Gospel that is referred to by some scholars as “On the Way” (“On the Way” section Mark 8:14-10:52). It begins with the restoration of the blind man’s sight in Bethsaida and ends with Jesus’s restoration of Bartimaeus’s sight in Jericho just before heading up the mountain to Jerusalem, where he will undergo his thrice-predicted passion and death.

From Bethsaida, Jesus and his disciples set out for the villages in the region of Caesarea-Philippi. It is while making their way to Caesarea-Philippi that Peter, speaking for the Twelve, confesses Jesus as “the Christ” (Mark 8:29). With the first prediction of his passion and death that follows Peter’s confession, the Lord inaugurates what might be called a school of discipleship, which he teaches as he makes his way to the cross (Mark 8:31). 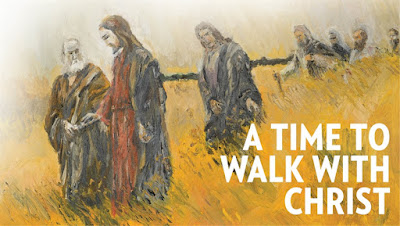 This school of discipleship consists of three lessons, each of which begins with Jesus predicting his passion and death. These lessons follow a three-fold pedagogy: Jesus predicts his passion and death, the Twelve demur, Jesus teaches his reluctant followers what it means to be his disciple. Our Gospel reading for today is part of the second lesson. Last week’s Gospel, which was the beginning of the second lesson in Christian discipleship, ended with the Lord’s insistence that whoever would be greatest must become the least, by which he means becoming childlike (Mark 8:33-37).

The first part of today's Gospel is about not being jealous and narrow-minded in a childish way. One of the Twelve, John, becomes upset when he encounters someone driving out demons in Jesus’s name. He was so upset, in fact, that he tried to stop the man from doing it because he did not belong to Jesus’s traveling band of disciples. Jesus challenges John’s indignation directly by stating that “whoever is not against us is for us” (Mark 9:40). Being much like John, we often reverse this by insisting that “whoever is not for us is against us.”

Of course, in St. Matthew’s Gospel we find Jesus saying, “Whoever is not with me is against me, and whoever does not gather with me scatters” (See Matthew 12:26-30). It is important to notice the difference in context between these two utterances. The one John encounters healing in Jesus’s name is gathering with Jesus, cooperating in his ministry of liberating people from their demons. In the context of Matthew’s quote, the Pharisees accuse Jesus of casting out demons by the power of the devil. Those who oppose him in that instance are not interested in the liberation Christ brings, they remain intent to lay heavy burdens on themselves and on others (Matthew 23:4).

All of this allows us to conclude by considering our very challenging Epistle reading, taken from the Letter of James. After the manner of Jesus, the inspired author reminds us that far from being a blessing from God, riches and/or focusing your life on obtaining them is a curse and a path to damnation. This flies in the face of a lot of what passes for Christianity in the U.S. Inexplicably, many U.S. Catholics have adopted this very un-Catholic view. Such a view holds either explicitly or implicitly that wealth and prosperity are God's blessing on the righteous and God-fearing. The Gospel insists on the opposite; riches and material comfort are obstacles to salvation, not assurances of it in the here and now.

Today, my friends, we need to take Jesus's insistence that the greatest in God's kingdom is the least with the utmost seriousness. This means investing your time, efforts and resources in ushering in God's reign. In the end, investing in others, especially in those who lack life's necessities, is the only investment worth making. Orthodoxy means correct confession, or, more simply, right belief. Orthopraxy, on the other hand, refers to correct practice or doing the right thing. As would-be disciples of Jesus, we need to recognize that “there is no orthodoxy without orthopraxy” (Vladimir Lossky cited by Jonathan Warren in “Lancelot Andrewes, the Star of Preachers”).
at September 30, 2018