"There will be an answer, let it be"

I did not forget to post a traditio yesterday. I was simply busy with many things, good things. Unlike my early days as a blogger, blogging is way down on my list of priorities. I have been thinking all week about the Viganò "testimony," which is turning out be mostly false. I have been rather vocal about it o social media. On my blog and henceforth on other social media platforms I am taking Pope Francis's high road, confident that what the testimony declares as it bears on Francis's conduct as pope is simply not true. His story unravels more each day.

I will point to a statement by my former bishop, John Wester, who now serves as archbishop of Santa Fe, New Mexico, in support of Pope Francis. More than his public support for the Holy Father, I think he hit the nail on the head when he denounces that smear campaign against the pope as vile in that it detracts from the victims. Exploiting the crisis in this way is cynical in the extreme. In many ways, as a Church, we still do not get it.

On a brighter note, today is the Nativity of the Blessed Mary. Yes, today we celebrate the birthday of the Mother of God, Mary most holy. We need our Blessed Mother's intercession very badly in our present moment. So, pray the Rosary today. May I suggest the Glorious Mysteries, which include the Virgin's bodily Assumption into heaven and her coronation as Queen of Heaven? 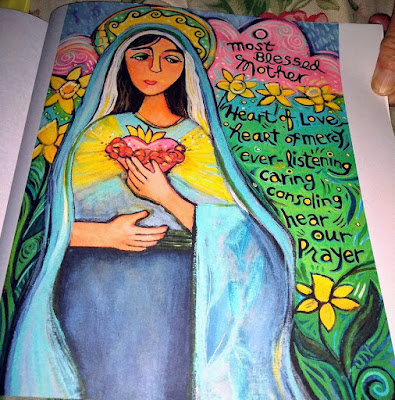 I can't claim to be a great fan of The Beatles. By no means does this indicate I don't like the band. My ambivalence toward The Beatles is more generational than anything. One Beatles' song I have always loved, even prior to becoming Roman Catholic in my 20s is "Let It Be." In fact, when I was diaconate formation I wrote a reflection on this song for an assignment. In college, towards the beginning of the time I started to think seriously about becoming Catholic, I had a powerful experience with this song. This experience was the focus of the reflection I wrote in formation. It also coheres with Pope Francis's serene approach to the falsehoods.

Unsurprisingly, our weekly traditio is The Beatles' "Let It Be." I am posting it with a twist- the recently departed Aretha Franklin singing it. Yes, I grasp that this twice in just a few weeks I have made recourse to Aretha singing Marian songs. I am weird like that, deal with it.

All in all, another pretty distressing week. Be assured I am working hard on not reducing my blog to a catalogue of woes. I don't mind saying I am finding that pretty difficult right now, which is a reason I have not posted much lately. You see, as a Roman Catholic clergyman in the United States right now it is difficult to write or say anything that doesn't relate to the abuse crisis, lest you be seen as ignoring the elephant in the room. On the other hand, what else is there to say, really? Words fail, get old, begin to make matters worse, not better.
at September 08, 2018