Jesus: the true bread from heaven

There is an easily discernible harmony between all of our readings this week. Given the importance of this 5-week interlude during which we take a break from reading the Gospel of Mark and read the Bread of Life Discourse found in St. John's Gospel, I think it is important to stay close to the shore and examine what the Scriptures tell us and not become distracted by rushing to carve out a neat moral, or by our desire to reduce what Christ reveals by telling a different story, or by making a joke in the face of this opportunity and so shrink back from the intense encounter with reality to which Jesus invites us.

In our reading from Ephesians, the Apostle exhorts the members of the Church in ancient Ephesus to live in what he called in last week's second reading "a manner worthy of the[ir] call" ( Eph 4:1). Just like you and I, the Christians of ancient Ephesus received their call in Baptism. In this week's reading, which moves us a bit further along in the same chapter, the nature of this call is made more explicit. They are to live like they have "learned Christ" (Eph 4:20). The result of learning Christ is that one puts "away the old self," thus eschewing her "former way of life," which is "corrupted through deceitful desires" (Eph 4:22). Our corruption "through deceitful desires," which promise us fulfillment but fail to deliver, Paul often calls "flesh." While neither word is used in this passage, in Koine Greek, the language of the entire New Testament, "flesh" is sarx, not soma. Soma refers to your physical body, which is in no way to be denigrated, whereas sarx refers to the deceitful desires that threaten to corrupt us, even after Baptism.

The "futility" of mind referred to in our reading from Ephesians (4:17) is the result of giving in to the deceitful desires that corrupt, mistaking our indulgence in them as fulfillment. What this futility of mind amounts to is the willingness to sell yourself short, to settle for less in the belief that "this is as good as it gets." In his sermon, The Weight of Glory, C.S. Lewis accurately describes what it means to sell oneself short in this way:

it would seem that Our Lord finds our desires, not too strong, but too weak. We are half-hearted creatures, fooling about with drink and sex and ambition when infinite joy is offered us, like an ignorant child who wants to go on making mud pies in a slum because he cannot imagine what is meant by the offer of a holiday at the sea. We are far too easily pleased

In Baptism we put "away the old self" when make our three-fold rejection of sin. Because Jesus is the Gospel, the Good News, the One who brings life from death, there is a positive aspect as well. This positive aspect is conveyed in the Rite of Baptism by the three-fold profession of faith. At the heart (i.e., in the middle) of our profession is the question:

Do you believe in Jesus Christ, his only Son, our Lord,
who was born of the Virgin Mary,
suffered death and was buried,
rose again from the dead
and is seated at the right hand of the Father?

One's answer to this question is one's answer to reality. It is one's answer to reality because it is the recognition of all the factors that together constitute (i.e., make up) reality. To answer this question affirmatively in a casual manner or without really meaning it just might be the worst blasphemy there is. The result of one's positive answer is Baptism. The result of Baptism is being "renewed in the spirit of your minds," putting "on the new self, created in God’s way in righteousness and holiness of truth" (Eph 4:23-24). Another feature of the Rite of Baptism is being clothed with a white garment after emerging from your submersion into the very life of God. This white garment is a symbol of putting on one's new self, of putting on Christ. 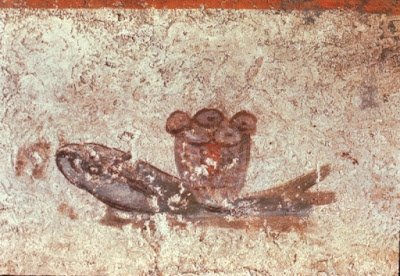 Being made new in Christ enables one to see with new eyes. Among other things, seeing with new eyes enables you to see God at work in and through all things - in all people you meet and through all the circumstances you face. Just as beta carotene, which our bodies convert into Vitamin A, is important for good eye health and vision, our spiritual eyesight is nourished by receiving Holy Communion. This is brought home in a dramatic way in our reading from Exodus and in our Gospel reading.

In our reading from Exodus, the Israelites complain to each other about going hungry in the desert. They begin to lament the fact that God liberated them from Egypt by the hand of Moses. Despite the fact that, in Egypt, they were slaves treated with increasing hostility, at least they ate their fill every day. Hearing their grumbling, God promised to provide them with manna in the morning and quail in the evening every day. Later, of course, they will complain about this too (see Numbers 11:1-15). Seeing with the eyes of faith enables one to proclaim in times of trouble, even when your very life feels imperiled, those times when God seems absent or far away, using the words of last week's responsorial: "The hand of the Lord feeds us; he answers all our needs."

In today's Gospel, Jesus and his closest disciples re-cross the Sea of Galilee and come back to Capernaum, which served as home-base for their Galilean mission. It seems that the same crowd that followed them from Capernaum to the spot on the other side also followed them back. Jesus quickly discerns why they followed him back: they wanted him to keep feeding them. It is important to note, I think, that the Lord does not criticize them for this. He does not call them "lazy" or "dependent." This is most likely because those who followed him for this reason were very poor. These folks probably did not enjoy what we call today "food security." In all likelihood, just as the working poor do today, they worked very hard for very little. Stated starkly, they probably worked very hard and yet did not receive what they needed to get by. While it is not the point of this passage, their plight and the injustice that underlies it was a matter of deep concern to the Lord. Therefore, it should be a concern for anyone who claims his name. Taking care of the poor and seeking to overcome the injustice that leaves people lacking what they need surely constitute part of what it means for Christians to live in manner worthy of our call.

Seizing the moment and leveraging the interest of those who were so intent on following him, Jesus tells them to "not work for food that perishes but for the food that endures for eternal life" (John 6:27). With this exhortation, the Lord catches their interest. They ask: How do we accomplish God's work? (John 6:28). Jesus's answer to their question is very important: "This is the work of God, that you believe in the one he sent" (John 6:29). Seemingly aware that Jesus is referring to himself as the one God sent, in a most human manner, they ask Jesus (keep in mind, John portrays these as being the same people who were not only witnesses to but beneficiaries of the feeding of the multitude) to show them a sign so that they can accomplish the work of God, the opus Dei. They point to the event set forth in our reading from Exodus as an example of the kind of sign they seek. Nonetheless and quite understandably, their demand for a definitive sign still seems to be tied to food security, which, again, is no criticism of these people who probably went hungry quite often. This is the point at which Jesus begins to tell them the Good News.

Jesus says that while the bread Moses gave the Israelites (i.e., manna) was, indeed, bread from heaven, it was not the "true" heavenly bread (John 6:32). He goes on to tell them something shocking (the shock of what he tells them will reverberate for us across the next three weeks): "I am the bread of life; whoever comes to me will never hunger, and whoever believes in me will never thirst" (John 6:35).
at August 04, 2018