This morning I saw piece on the New York Magazine "Intelligencer" page that I found disturbing but hardly surprising: "News Anchors Reciting Sinclair Propaganda Is Even More Terrifying in Unison." The lead-off of this piece by Chas Danner is what I can only describe as Orwellian:


Over the last week or so, local television news anchors across the the country have joined together to paradoxically warn viewers about the “troubling trend of irresponsible, one-sided news stories plaguing our country.” The identical, seemingly earnest editorial messages paid lip service to the importance of fact-checking and unbiased reporting, but they also complained about “false news” and “fake stories.” If that seems to echo the rhetoric of President Trump, it’s probably because the statement was written by one of his allies

I use the adjective "Orwellian" in the awareness that it is increasingly incomprehensible to people, which I also find discouraging.

It is apparent to anyone who has paid attention over the past three decades or so that our so-called fourth estate has been in failure mode for a long time. There are some exceptions, of course. But we now live in a strange time when fake news, parroted by the mainstream media, is deemed real news. At the same time, independent and conscientious journalists and media outlets are dismissed as "the MSM" and their reporting on real matters, things that matter, is dismissed as fake news.

Truth be told, as frustrating as the Stormy Daniels affair and the independent counsel's Russia investigation, which has been irretrievably compromised by its being turned into a media circus, are really distractions from what is really happening right under our noses: tax "reform," healthcare "reform." immigration "reform," the military-industrial complex and its accompanying saber-rattling, etc. It bears noting that in his Easter Urbi et Orbi (i.e., "The City and the World"), Pope Francis took of the latter of these by noting the "apparently endless war" in Syria, the conflict happening the Holy Land, as well as in Yemen. Let's not forget how important perpetual war was to Oceania in 1984. Far from desiring the re-uniting of altar and throne, it is tremendously important for the Church to maintain her independence in order to be prophetic. What does it mean to be prophetic? It means to speak the truth fearlessly irrespective of consequences. 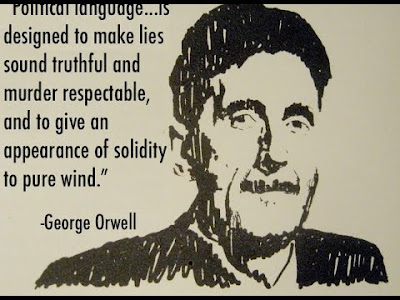 I am currently reading Orwell's novel Coming Up For Air. He wrote this novel about a decade prior to 1984. In it, Orwell introduced many themes he would take up more explicitly and thoroughly in 1984. While I think fair to call Orwell a prophet of sorts, it wasn't really that difficult to see where things were headed. In Coming Up For Air, the main character, George Bowling, worries, not so much about the impending war (WWII), in which he was too old fight (he was a veteran of the Great War) but about "the after-war" -


But it isn't the war that matters, it's the after-war. The world we're going down into, the of hate-world, slogan-world. The coloured shirts, the barbed wire, the rubber truncheons. The secret cells where the electric light burns night and day, and the detectives watching you while you sleep. And the processions and posters with enormous faces, and the crowds of a million people all cheering for the Leader till the deafen themselves into thinking that they really worship him, and all the time, underneath, they hate him so that they want to puke. It's all going to happen. Or isn't it? Some days I know it's impossible, other days I know it's inevitable (George Orwell, Coming Up For Air [San Diego: A Harvest Book reprint, 1969], 176)

As I finish Coming Up For Air it is fascinating for me to see in middle age how much Orwell shaped my politics. I read a lot of Orwell between the summer that separated my junior from my senior year in high school and when I began college some three and-a-half years later.

One result of reading Orwell was my decision not only to study Philosophy but my deep interest in the philosophy of language and my on-going fascination with Wittgenstein's philosophy (as well as my later fascination with the writings of Samuel Beckett). The second result was Orwell is largely responsible for forming my views of both capitalism and Marxism.

Because last Friday was Good Friday I did not post a traditio. To make up for that I am posting a YouTube link where you can listen to Orwell's "Politics and the English Language, which, at least in my opinion, remains his most important work of non-fiction:

Email ThisBlogThis!Share to TwitterShare to FacebookShare to Pinterest
Labels: Community of the Heart, Media, Politics, Reflections and Ruminations