There is a remarkable convergence between the troubling events of this past week and our readings for this twentieth Sunday in Ordinary Time. Our first reading comes from the part of the Book of the prophet Isaiah known as trito, or third Isaiah. This section consists of the final eleven chapters of the book, which were written after the Israelites returned from their captivity in Babylon. As incredible as it might sound, we are the fulfillment of the prophecy this oracle contains. We are the foreigners who have entered into covenant with the LORD. In fact, through our participation in this Eucharist this covenant into which God brought us when we were baptized is renewed.

Throughout the history of Israel, God’s chosen people, there were two main strands of thinking concerning their chosenness. The first strand, which is lampooned in the Book of Jonah, held that Israelites, as children of the patriarchs Abraham, Isaac, and Jacob, were chosen to exclusion of all other people. Predictably, such a view inevitably led those who held it to think of themselves as superior to those who do not belong to Israel (i.e., the Gentiles). There is another, healthier, strand that reaches back to the covenant that God entered into with Abraham, when God promised our father in faith that his descendants would be more numerous than grains of sand on a seashore (Gen 22:17).

God told Abraham that because of his obedience, which bid him to take his household and journey to the land God had set apart for him, that through his descendants all the nations of the earth would be blessed (Gen 22:18). Of course, the blessing was God’s only Begotten Son becoming human and reconciling the world to the Father by his life, passion, death, and resurrection. It is Jesus who allows us to become Abraham’s children through faith. This is why St Paul, in his Letter to the Galatians, insisted:


For all of you who were baptized into Christ have clothed yourselves with Christ. There is neither Jew nor Greek, there is neither slave nor free person, there is not male and female; for you are all one in Christ Jesus (Gal 3:27-28)

Immediately following this magnificent explanation about what it means to be a Christian, the Apostle wrote: “And if you belong to Christ, then you are Abraham’s descendant, heirs according to the promise” (Gal 3:29). Being a child of Abraham is a matter of faith, not of blood, let alone soil. 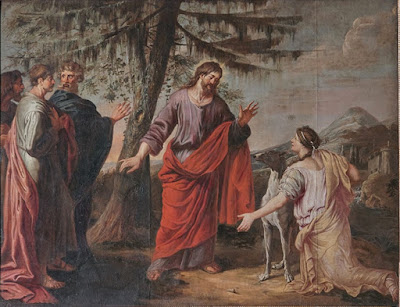 
With regard to the correlation between current events and today’s readings, Paul stated that one of the purposes of his ministry to the Gentiles was to make his fellow Jews “jealous” because of the Gentiles’ acceptance of salvation. God gave salvation to the world through Israel, not merely for them, but for them and everyone else. This is why we can say with confidence: The Church, God's people, “exists in order to evangelize” (Evangelii Nuntiandi par 14). Right now, our world and our country are badly in need of the Good News of God's mercy given us in Christ.

The mission of the Church, the mission of all the baptized, is to spread the Gospel to everyone, no exceptions. By bringing Christ to people, we play our role in God’s mission of making the whole of humanity a single family. It was Paul’s hope that by witnessing the conversion of the Gentiles, his fellow Jews would respond to their vocation as God’s chosen people and realize the end for which God chose them. As Jesus told the Samaritan woman whom he encountered at Jacob’s well: “salvation is from the Jews” (John 4:22). As St Peter is recorded preaching in Acts: “In truth, I see that God shows no partiality. Rather, in every nation whoever fears him and acts uprightly is acceptable to him” (Acts 10:34b-35).

Today’s Gospel is one of those passages that marks the beginning of the fulfillment of the oracle from Isaiah in our first reading. We hear of an instance through which God begins expanding his covenant to include everyone through Christ. Despite being a Gentile, the Canaanite woman greeted Jesus with the messianic greeting, which one would think only a Jew who recognized him as Messiah might use: “Son of David” (Matt 15:22). She also hailed him as “Lord,” which goes beyond Messiah. But before greeting him thus, she first pleaded with him to have mercy on her by casting demons out of her afflicted daughter (Matt 15:22).

It is because of the woman’s faith expressed in her greetings that Jesus could use this encounter as we might call “a teaching moment.” What Jesus sought to teach is that God extends divine mercy to everyone, to Jew and Gentile alike. As seems to have often been the case with people they perceived as pesky, perhaps particularly a Gentile woman, Jesus’s disciples demanded that he send her away. Rather than doing so, Jesus stated that he was sent “only to the lost sheep of the house of Israel” (Matt 15:24). Upon hearing him say this, replying from her helplessness, she simply pleaded, “Lord, help me” (Matt 15:24). Their dialogue proceeded in this manner until the woman said she would be content with scraps from God's table. Her begging moved Jesus. He then commended her for her steadfast faith, which resulted in her daughter being healed.

I think that the inspired author of Matthew’s Gospel handed on the dialogue in the manner he did to demonstrate to Jewish Christians the same thing Paul wrote about accomplishing through his ministry to the Gentiles. It is important to note that the Gospel of Matthew was written for a largely Jewish Christian community. While it was likely a mixed group of Jews and Greek-speaking Gentiles that made up the community from the beginning, the balance was shifting with Gentile Christians growing larger in proportion to Jewish Christians. There is a parallel between this situation and that in our own diocese.

In 1979, the Catholic bishops of the United States issued a Pastoral Letter on Racism: Brothers and Sisters To Us. In it they stated clearly: “Racism is a sin: a sin that divides the human family, blots out the image of God among specific members of that family, and violates the fundamental human dignity of those called to be children of the same Father.”

In light of today’s readings, it seems fitting to observe that if we ourselves, the Church, or our nation are to be healed of the sin of racism, each of us needs to reflect on what in us needs to be healed in this regard. We may not think of ourselves as racist, being prejudiced, or intolerant but is that entirely the case? Intolerance and bias can hide in our attitudes and manifest in our actions. Each one of us needs to search our heart and find those places where we might harbor hostility, concealed discrimination and prejudice. Then we need to repent and change, endeavoring to do better in our relations with those who are different from us. If we are to be agents of the Gospel, that is, evangelists, and convert others we must first be converted.
at August 20, 2017