"I'd listen to the Gospel ringing in my ears"

Our Friday traditio is two songs. 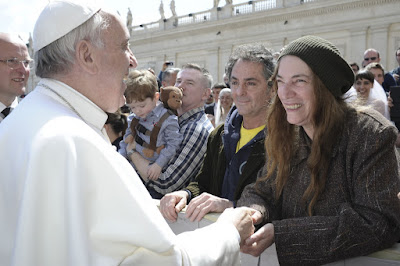 First up is Detroit's own MC5 with "Sister Anne."

A second one by Fred Sonic's (of MC5) wife, the high priestess of punk, Patti Smith, "Glora":

When a protest kicked up back in 2014 about Smith's playing at the Vatican being blasphemous, Patti said in an interview: "I had a strong religious upbringing, and the first word on my first LP is Jesus [the album was Horses]. I did a lot of thinking. I’m not against Jesus, but I was 20 and I wanted to make my own mistakes and I didn’t want anyone dying for me. I stand behind that 20-year-old girl, but I have evolved."

This year's presidential election should spark a resurgence of punk. As Jello Biafra, founder, lead singer, and chief lyricist of Dead Kennedys said in an interview, when asked if punk is dead: "In some ways maybe it [punk] should die 'cuz then it could be reborn."
at August 19, 2016