Some weeks our readings from the lectionary have a distinct theme. This week is one such time. The theme, in case you've not looked at the readings, is humility.

We need to distinguish humility from self-deprecation. C.S. Lewis, as he did with so many aspects of Christian faith, stated it in a pithy manner in his book Mere Christianity: "Humility is not thinking less of yourself, but thinking of yourself less." In fact, Lewis' quote could easily serve as a comprehensive summary of Jesus' teaching today. But I would add, humility consists in not thinking too highly or too lowly of yourself. It's tempting to say, humility consists in seeing yourself as you truly are, but that quickly becomes very complex. Suffice it to note that only God sees you as you really are, which is as someone beloved.

Because humility consists in both putting others before yourself, as Jesus indicated in his parable in the Pharisee's house, as well as not thinking of yourself in too exalted or debased a manner, it is a virtue that requires our constant care. At this point an objection might be raised that Jesus, in today's Gospel, instructs us to think of ourselves in the lowest way, unworried about balance. While he certainly urges us not to exalt ourselves, it is with reference to other people. In other words, he is telling us to put others before ourselves, especially the blessed ones: the poor, the sick, the lame, the powerless. This is what it means to observe the second of the Lord's two Great Commandments, loving our neighbor as we love ourselves. We are to have a just love of self. 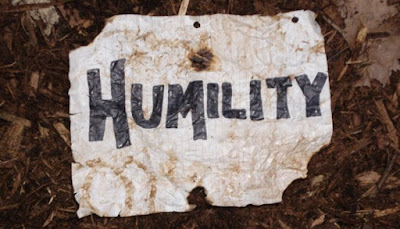 Neither does Jesus urge us to take the lowest seat out of calculation, only in order to gain a more exalted place. It seems that, too, would be self-serving. I think it's about being a beggar who is grateful for being invited to feast at all.

The horizon of Jesus' parable is eternity. If it's not, then what he teaches is meaningless. In God's kingdom the humble will be exalted and the proud will be cast down. Casting down the humbling the exalted is an echo from our Lady's Magnificat: "he has scattered the proud in their conceit, he has cast down the mighty from their thrones." Our reading from the Letter to the Hebrews gives us the horizon. In our reading from Hebrews the inspired author discusses approaching "the city of the living God, the heavenly Jerusalem," something we do when we gather to celebrate the Eucharist each Sunday. It is there that we encounter not only "countless angels in festal gathering," but "the assembly of the firstborn enrolled in heaven," along with "the spirits of the just made perfect" (Heb 12:22-23)- by participating in Mass we participate in a very real way in the communion sanctorum. The kingdom of God will consist only of those who put others before themselves. This why St. Paul constantly encourages the early Christian communities to do this.

In one of my favorite chapters in all of Sacred Scripture, Romans 12, Paul urges - "Let love be sincere; hate what is evil, hold on to what is good; love one another with mutual affection; anticipate one another in showing honor" (Rom 12:9-10).

I can do no better discussing humility than did Metropolitan Anthony Bloom in his short, powerful book Beginning to Pray:

The word "humility" comes from the Latin word "humus" which means fertile ground. To me, humility is not what we often make of it: the sheepish way of trying to imagine that we are the worst of all and trying to convince others that our artificial ways of behaving show that we are aware of that. Humility is the situation of the earth. The earth has always been there, always taken for granted, never remembered, always trodden on by everyone, somewhere we cast and pour out all the refuse, all we don’t need. It’s there, silent and accepting everything and in a miraculous way making out of all the refuse new richness in spite corruption, transforming corruption itself into a power of life and a new possibility of creativeness… Learn to be like this before God; abandoned, surrendered, ready to receive anything from people and anything from God (35)