"Will you search through the lonely earth for me"?

Late last week I came across a current BBC 4's television series, Detectorists. I've more or less binge watched my way through both series (i.e., seasons). Mackenzie Crook, who so brilliantly played Gareth in the original and, for my money, the only show The Office, is the show's creator, writer, director. He also plays one of the two main characters: Andy Stone. The show is about two friends who are dedicated "detectorists," that is, people who spend as much time as possible walking with their metal detectors through the fields of rural northern Essex. While the setting, characters, and situations are somewhat different, the vibe of "Detectorists" puts me very much in mind of the Irish RTE series Trivia. I suppose the most succinct way I can think of describe this "vibe" is funny in a wonderfully understated way and often poignant.

Life, much like the scriptural commentaries of Origen, ranges from the ridiculous to the sublime, making stops at all points in between. As I ease into middle age, I am learning to enjoy the ride. One effort I have made over the last year is not living my life in reverse, or mentally thinking what I would do in situations in which I can't see ever finding myself. I've found it a useful mental strategy. 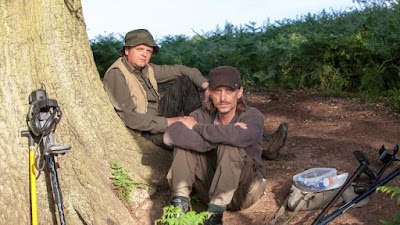 Last Saturday I used the Scripture reading from Morning Prayer to practice lectio divina. It was rather spontaneous, as opposed to a deliberate choice. The text was Romans 12:14-16a: "Bless your persecutors; bless and do not curse them. Rejoice with those who rejoice, weep with those who weep. Have the same attitude toward all. Put away ambitious thoughts and associate with those who are lowly" (Morning Prayer for Saturday, Week II). What leapt out at me was the final sentence. As I mulled that whole sentence, it quickly shrunk down to the phrase, "Put away ambitious thoughts." But then, the twelfth chapter of Romans has long been one of my favorite passages in the whole of Scripture. If one were to translate Paul's Greek literally, it would read something like: "Being disposed to no the high," made more sensible in English- not being disposed to what is high. What is it we are not be disposed to? The transliterated word is hupséla, the correct variant of the word hupsélos. What is hupsélos? That which is high, or lofty.

What have my previous two paragraphs to do with my first paragraph, what is the link? I think it's simple and, at least to me, quite obvious: Detectorists and Trivia are both shows about everyday, rather humble, people, who are trying, in their often self-subverting way, to be happy and fulfilled. The characters, again in their own, often screwed ways, also strive to be good in the awareness that their own happiness is not disconnected from the happiness of others. I also like the relative calmness of both programs. Being calm is something I am working on. This requires daily working on being kind, patient, and understanding. I don't know about you, sisters and brothers, but for me this requires a lot prayer, which is a great thing.

At least for me, cultivating a calm disposition depends on eschewing caffeine and alcohol. Unexpectedly, I've found giving up the latter more beneficial than the former. In the year since I gave up both I've experimented with introducing them back into my life here and there. Those experiments only verified that I made the correct choice in giving them up.

Our Friday traditio for this hot summer week is Johnny Flynn singing his folk song, "Detectorists," in an episode from the show's first series-