Year B Second Sunday of Lent

“Listen to him.”1 What the voice from the cloud in today’s Gospel says to Peter, James, John, it says also to us. This exhortation to listen to Jesus is echoed in the second chapter of Saint John’s Gospel, when Mary says to the stewards at the Wedding Feast of Cana, “Do whatever he tells you.”2 As you will know from praying it, the miracle at the Wedding Feast of Cana and the Transfiguration are the second and fourth Luminous Mysteries of the Blessed Virgin’s Holy Rosary.

Because listening to Jesus is what it means to a Christian, it seems important to once again make the distinction between hearing and listening. To listen to someone means to pay close attention to what s/he is saying without, at the same time, formulating your response or rebuttal. Listening is a skill, one that is acquired by practicing it as a spiritual discipline. Because we live in a noisy time in a noisy culture we are daily inundated with noise. As a result, many people find the silence listening requires unsettling.

Listening to Jesus leads to obedience. Obedience does not simply mean doing what you are told, just carrying out commands. To obey means to listen deeply. No place in Christian tradition better expresses this than opening words of the of Rule of Saint Benedict: “Listen carefully, my son, to the master’s instructions, and attend to them with the ear of your heart.”3

Because God does not often or even usually tell us we want or expect to hear, obeying God often entails sacrifice. Take the very complex and troubling first reading from Genesis. Abraham listened to God, not just once but continually sought to discern what God said.

In calling Abraham to sacrifice Isaac, God asked him to give up what was most dear to him. After all, Isaac was the one through whom God was going to fulfill his promise to make Abraham's and Sarah’s descendants “a mighty nation” through which all the nations of the earth would be blessed.4

By listening to God, Abraham did not wind up committing the unimaginably horrific act of sacrificing his son. Rather, his trust, his hope, that “God will provide the sheep for the burnt offering” was vindicated, even if only at the last minute.5 Hope, it bears noting, lies beyond optimism.

In our Gospel, coming down the mountain, Jesus told Peter, James, and John not to tell anyone what they experienced until “the Son of Man had risen from the dead.”6 They did not understand “what rising from the dead meant.”7 In other words, they did not yet grasp that hope lies beyond optimism, just as resurrection lies beyond crucifixion. Hope begins where optimism ends. 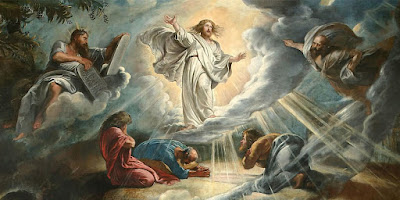 
To show that the disciples’ puzzling over what rising from the dead meant was the result of their not listening, in Mark’s Gospel, immediately before the Transfiguration, Jesus laid out the conditions for being his follower. He began that teaching with these words:

Whoever wishes to come after me must deny himself, take up his cross, and follow me.For whoever wishes to save his life will lose it, but whoever loses his life for my sake and that of the gospel will save it8

Understandably, it is the cross that causes us to shrink back. What Jesus teaches his disciples about what it means to follow him is not only what must precede his resurrection but the central paradox of the Christian faith. So daunting was what Jesus had to undergo that he pleaded with the Father “Take this cup away from me.”9

Concerning the first of the fundamental spiritual disciplines, prayer, a good rule-of-thumb is to spend at least as much time listening to God, that is, in silence, as you do talking to God. Silence is God’s first language. As with mastering any language, learning silence requires daily practice. Find some time for attentive quiet every day, even if means sacrificing a little sleep.

If God is for us, who can be against us?10 At least for Saint Paul, this is a rhetorical question. The answer to this question is “Nobody.” But, as with the episode involving and Isaac, we need to attend to the fact that Paul, immediately after his assertion that God is for us, invokes the sacrifice of his only Son. If we’re truly for God, we can expect many to be against us. In the end, through Christ, God prevails. Experiencing this is what enables us to understand what it means to die and rise.

Like Abraham, like Jesus, we need to trust God even when we cannot see beyond what stands immediately before us, when we can’t see past our present circumstances, what in the Letter to the Ephesians is called “this present darkness.”11

Human beings often seek the path of least resistance. As Abraham discovered, as Jesus himself found out, not being our way, God’s way often calls you to walk the path of resistance. Keep in mind, it was Jesus teaching about the Kingdom of God in the synagogue that caused the demon to declare himself.12 Thus, he was opposed from the beginning of his ministry.

Like any discipline, the fundamental spiritual disciplines we seek to intensify and practice more intentionally during Lent are not ends in themselves. Rather, they are means to the end of being transfigured more and more into the image of Christ. So, during the days of this holy season, spend some time listening to Jesus. What sacrifice is he asking of you? As the psalmist enjoins: “If today you hear his voice, harden not your heart.”13