Venerable Matt Talbot, pray for us

Ninety-five years ago today, on 7 June 1925, which was also Trinity Sunday (the Sunday after Pentecost), Matt Talbot, a laborer who worked in what we would call today a lumber yard, was walking to Mass at Saint Savior's Church in Dublin, Ireland. While traversing Granby Lane, he collapsed and died. Who was Matt Talbot?

Stated simply, Matt Talbot was a nobody. Born into a poor, working-class family in Dublin in 1856, his father and all his older brothers were fond of the drink. He left school at 12 and went to work for a wine merchant. By the age of 13, Matt was a full-fledged alcoholic. He would remain in the grips of alcohol for sixteen years. 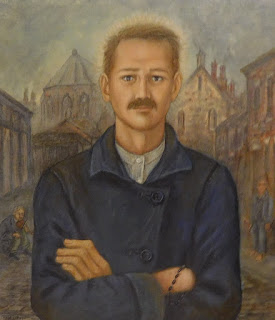 At age 28 he was jobless, penniless, friendless, and unable to open a tab at any of the pubs in the part of Dublin where he lived. He took to hanging around outside pubs hoping someone would invite him in and buy him a drink. One day, after several "friends" passed him by without so much as a greeting, Matt, realizing his hopelessness, went home and told his mother, who had more or less given up on him, that he was going to take the 90-day pledge not to drink.

To the surprise of his long-suffering mother, Matt went to Holy Cross College and took the pledge. After ninety days of living alcohol-free, Talbot pledged not to drink for six more months. At the end of those six months, having been sober for nine months, Matt Talbot swore off alcohol for the remaining forty years of his life. This was not easy for Matt. It seems that for the first seven years sober living was often a very difficult struggle for him. How did he stay sober through tough times?

Matt found the strength he needed in daily prayer, fasting, and attending Mass. Though not well-educated, he read as much as could get his hands on. A professor provided some tutoring and mentoring for Matt, who also sought spiritual direction from a few priests. Like most devout Roman Catholics in those days, Talbot went to confession frequently. He scrupulously sought to repay the debts he incurred over the years alcohol stole from him.

One incident that caused him shame for the rest of his life was during his days on the drink he stole the fiddle of a street musician. He sold the instrument and used the money to buy booze. After achieving sobriety, Matt tried to find the man from whom he stole the fiddle to pay him for the instrument. Unsuccessful in locating the victim of his thievery, Talbot donated the money to have a Mass said for the fiddler. 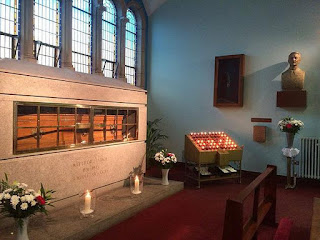 As someone noted, Matt Talbot lived the 12 Steps of AA before they were invented.

After giving up alcohol, Talbot was able to find employment as a hod carrier and then, as he grew older, working in a timber yard. Attempts were made to discredit Talbot after his death by saying he was a strike-breaker. But as a dues-paying member of the Irish Transport and General Workers Union, Talbot participated in the strike of 1913. Initially, he refused the strike pay offered by the union because he didn't feel he'd earned it. But later he accepted the strike pay but insisted that his pay be distributed to other striking workers. Matt could do this because he never married or had children. To say he lived modestly is an understatement. He was also known to give financial assistance to his fellow workers, especially the ones supporting families.

When not working, Talbot went to Mass or spent time in his sparsely furnished flat reading and praying. It is doubtful he ever left Dublin the entirety of his life. At the suggestion of professor who taught Matt and mentored him, at some point he began wearing a light chain around his waist, under his clothes, next to his skin. He wore this as a sign of his penance, marking himself as a a penitent. Nobody knew he did this until after he was taken to the hospital on the day he died. In fact, it was the notice of this chain that led to an investigation of Matt Talbot's very solitary, penitential, quiet, and holy life. This is the reason we know anything about him today.

On 3 October 1975, Pope Paul VI declared Matt Talbot "Venerable," which is the second of four steps ordinarily required for someone to be declared a saint. To attain the next step, "Blessed," a documented miracle attributed to Talbot's intercession needs to occur. This seems strange to me because through Matt Talbot's intercession thousands of men and women have overcome addiction to alcohol and drugs. I have personally benefited from Matt Talbot's intercession, as have a small group of people with whom I used to meet in my previous parish assignment. Matt is one of my handful of heavenly friends; holy women and men on whose intercession I know I can rely. He is a member of my community of the heart.

Given his penchant for cutting through ecclesiastical bureaucracy, I was hoping that during his visit to Ireland in August 2018, Pope Francis, recognizing the power of Matt's intercession in the lives of so many, would declare him "Blessed." He did not. However, the Holy Father did visit Matt Talbot's shrine at Our Lady of Lourdes Church in Dublin. 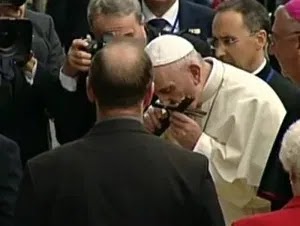 Matt Talbot medals can also be obtained as can holy cards that feature the prayer for Matt Talbot's canonization, which has received a nihil obstat as well as an imprimatur. You can access the prayer online here: Prayer for the Canonisation of Venerable Matt Talbot.

Email ThisBlogThis!Share to TwitterShare to FacebookShare to Pinterest
Labels: Community of the Heart, discipleship, Prayer, Saints