I am not preaching this week- a big sigh of relief. Nonetheless, with Trinity and Corpus Christi in the rearview mirror for this particular Year of Grace, we begin reading through the Gospel According to Saint Matthew in a semi-continuous way. Hopefully, Eucharistic communities take advantage of the opportunity to journey together through this Gospel on Sundays over the next several months. And through this endeavor deepening our walk with Jesus.

It bears noting that our New Testament reading, which comes from the fifth chapter of Saint Paul's Letter to the Romans, is one of those passages that are almost always gotten wrong. This is not merely an academic point. Because this passage is often mistranslated, it is then misinterpreted to ill-effect. I will try to capture this briefly, without belaboring the point.

The issue arises from the independent clause that constitutes verse twelve. In the New American Bible (Revised Edition- NT is not revised in this revision), this verse is translated: "Therefore, just as through one person sin entered the world, and through sin, death, and thus death came to all, inasmuch as all sinned." According to David Bentley Hart, the final four-word phrase of this verse "is not some kind of simple adverbial formula" (The New Testament: A Translation, footnote p, 296). Nonetheless, the "inasmuch" in the translation used for the Roman Catholic Lectionary serves as exactly the kind of adverbial formula that does not appear in the original Greek. So what, you might be asking?

Hart points out that when read with more precision, the final phrase of Romans 5:12, it becomes apparent that the masculine pronoun ᾧ refers to the previous masculine noun (i.e., θάνατος, thanatos, death). What this does is effectively reverse how this verse is usually interpreted, which is that death is the result of sin. Rather, it means that death is the source of sin. Understood his way, sin is something like the Freud's thanatos, or death drive. If I were to belabor this it would lead to an examination of what bearing this might have on our Western understanding of original sin. Don't worry, I am sticking to my commitment not to belabor the point.

With that exegetical issue out of the way, it becomes possible to look are our reading from the Hebrew Bible, taken from the Book of the Prophet Jeremiah. In this passage, the prophet is fearful yet faithful to his prophetic vocation, which was a very difficult one. Like any genuine prophet, God called Jeremiah to tell his people, the society, and their leaders things none of them wanted to hear. Jeremiah provides one more example from the scriptures that hope lies on the far side of despair. Jeremiah demonstrates what the late Brennan Manning would call Ruthless Trust.

Amid his complaint, Jeremiah says to God, "you test the just" (Jer 20:12). You are kidding yourself whenever you think doing, saying, standing up for the right thing is easy and painless. But despite the peril in which he finds himself, Jeremiah trusts God's mercy and justice to fulfill the difficult calling God gave him. For a brief overview of Jeremiah's life and prophetic ministry go to this link. Jesus challenges us in the same way Jeremiah challenged Israel. This is what led to the Lord's crucifixion.

It is the same "ruthless trust" that Jesus summons forth from his followers. Following Jesus is the same kind of difficult vocation Jeremiah received. It's the call we each received in baptism, for which we were further equipped in confirmation, and that is strengthened through each Eucharist. It's not easy to bear witness to Christ by insisting that his radical inclusivity includes everyone, especially the oppressed and those on the margins. In our present moment, this means standing up for black people and other people of color, who continue to be badly treated when they're not being neglected. 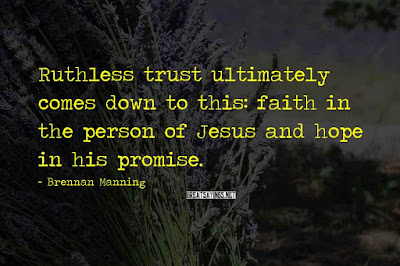 Being inclusive and caring for those on the margins after the manner of Jesus also means reaching out to gay, lesbian, transgender, and queer people. Just as we have implicit biases against people of color, we have deeply ingrained biases against LGBTQ people. Christians have the negative societal messages about LGBTQ people amplified in Church. For example, we tend to morally equate many gay people, particularly gay men, with the people Saint Paul denounced. Those whom Paul denounced were almost exclusively men. What he condemned them for was things like forcing non-consensual sex upon others such as catamites (i.e., pubescent young man kept for sexual purposes). Again, I won't belabor the point. I would urge you to read some recent (i.e., written in the last 25-30 years) by credible scripture scholars on this particular issue.

If you would like to listen to something informative on sex and gender, I refer you to the latest episode of Ologies "Neuroendocrinology (SEX & GENDER) with Daniel Pfau." I found a brief segment of this podcast both understandable and a bit heart-rending. This bit starts at 9:36 when the, host Alie Ward, responding to Daniel's description of growing up religious, says: "...as someone raised Catholic, who has plenty of years just de-tangling those tendrils from my own psyche, I was curious. Also, I was going to say 'de-tanging tentacles' of Catholic upbringing' just then but I had a moment where I earnestly like 'That's not fair to cephalopods.'" Far from being offended, I was challenged. So, instead of castigating or criticizing Alie, I am grateful to her for her honesty.

Instead of hiding behind the phrase "gender ideology," just like we need to be better educated in racial matters, in order to have credibility, we need to more knowledgeable about matters of sex, gender, and sexuality. When we're so quick to judge, condemn, and dismiss others can we surprised when others do that to us? Remember, the only people with whom Jesus was harsh were those who were harsh with others, especially those who were to harsh to those on the margins.

When the disconnect in the minds of young people between faith and science surfaces, it seems that many Catholics go right to some kind of cosmological-type apologetic, unmoved mover and all of that. In reality, when one considers the kinds of things we know about gender from the work of Daniel Pfau and others, it seems to me that their concerns hit closer to home.

Issues like sex, gender, and how they shape and form human sexuality are the kinds of scientific issues we need to address. Addressing them requires us to learn and unlearn, to be humble and open-hearted. In short, the question becomes, "Who needs to change and grow in the face of reality?" To do this biblical literalism has to be definitively overcome. Strangely, here in the United States, this persists even among many Catholics. This, too, requires ruthless trust and overcoming fear. I should go without saying that to follow Jesus requires a heart wide open to reality, to the mystery that unravels before you each day if you have the eyes to see. Conversely, plopping down in your chair, clenching your jaw, folding your arms, letting out a huff, intent and content to sit pat on your smug certainties demonstrates a distinct lack of trust.

Since I am making so many recommendations today, what's one more? If you want an accessible, well-written, well-reasoned exposition of New Testament sexuality and sexual morals, please read Robert Song's Covenant and Calling: Towards a Theology of Same-Sex Relationships.
at June 20, 2020